The evolution and non-evolution of the r-word 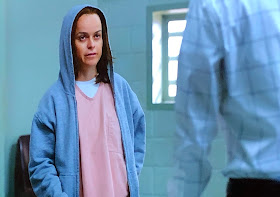 Dave and I are still making it through the final season of Orange is the New Black and yes, I realize how pathetic that is. In one episode, inmate Tiffany Doggett gets a G.E.D. practice test back from a teacher. The teacher points out that she copied answers from another inmate, except she transposed some letters. He asks her if gets dizzy when she stares at maps and she acknowledges that she does. He tells her that he thinks she has a learning disability. She looks dismayed.

"I am not...r-word," she says in an uncharacteristically soft voice.

He informs her that signs point to her being dyslexic, and a diagnosis is good because once they know it they can get help. He tells her about well-known people with dyslexia: Steve Jobs, Whoopi Goldberg, Tom Cruise, Henry Winkler. They bond over their mutual affection for Sister Act.

Back at the end of Season 1, I remember flinching when Nicki auditioned for the prison pageant with a joke that ended this way: "And finally, the penguin goes, 'He's not an eggplant, he's retarded!"
Now the show's writers know better than to use the word. That's progress. And yet, not so much. This character flinches at the thought of having a learning disability, and that's sure not doing any favors for people like my Max. Once again, the idea is being perpetuated that a disability is Not Good.

Is it in character for Tiffany to have this sort of response? Sure. But since when is this show realistic? Couldn't the writers have had Tiffany express her dismay without even referring to the r-word? Well, sure they could have—they are writers, after all.

Some things have changed in the eight years since I did the Twitter experiment where I asked people to reconsider their use of the r-word. Most people I know now get it, and I don't overhear teens using it like I used to when I'm out. Still, it pops up on social media. The New York Giants ditched player Janoris Jenkins after he called a fan that word on Twitter; he defended himself by saying that where he was from, they use all kinds of words as slang and apologized for offending someone.

Those of us who have spoken out about the r-word over the years have often been subject to dissension along the lines of "If not that word, then another will take its place." That's true, to be sure. Still, the underlying point is being aware of how we perceive and talk about people with intellectual disability. The dramedy The Peanut Butter Falcon (which deserved an Academy Award nomination, dangit!) does a great job of portraying the humanity of disability—as in, people with intellectual disability are full-fledged human beings with hopes, dreams, senses of humors and even strong drives to party.

Enough with the depiction of disability as undesired, sad and tragic. Here's hoping Hollywood can keep it more real.