The ock you milestone 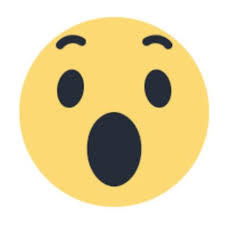 For years, I joked that if Max ever realized I had a blog about parenting a child with disabilities and told me to eff off for doing it, I'd be thrilled because it would mean he'd reached a certain level of cognition. These days, Max understands that I have this blog, and occasionally writes posts here. And we have reached that eff off milestone—just not in the way I ever expected.

It started a couple of months ago. When I arrived home from work, our sitter was standing by the door to greet me. "Max said something pretty strong to me," Janet said, mysteriously. Max heard us talking and walked over.

"OCK YOU!" Max announced, to no one in particular.

OMG. What?! Where had that come from? Well, er, um, Dave and I are not beyond saying it. Max could have also heard it on gaming videos he listens to on YouTube, or from another kid at school. I mean, he's 17. This is a pretty popular teen phrase.

"Oh, he doesn't know what it means," Janet said, trying to reassure me.

"I think he knows what it means," I responded.

OMG!!! WHERE HAD HE GOTTEN THAT FROM?

"How did you know what that means?" I asked Ben.

"Sabrina told me!" he announced, ratting out his sister.

And there I stood, Worst Ocking Mom of the Year.

I have to admit, though, I felt a twinge of: Wow, this boy. Max was acting out and pushing boundaries, as is typical of teens. I instinctively tend to appreciate it when he acts age appropriately. So as bad as it was, it was a sign of maturity. (Though I'm not sure the developmental pediatrician would agree.) Max was also articulating words I'd never before heard him say. He understood what they meant. And his enunciation was pretty clear; I could hear the "k" at the end. Consonants are really hard for him.

I get how awful it may seem to take any delight in a cursing teen. But I am a parent who was told my child might never talk and that he could have serious cognitive issues. I'm a parent who used to despair when I drove my baby around in the car and he didn't babble or make a single peep, like babies do. I'm a parent who spent countless hours programming communication devices to help her child express himself. I'm a parent who does serious happy dances over any new sound Max makes. And I am a parent who has spent a bazillion dollars in speech therapy over the last seventeen years. Can you blame me for that twinge of "wow"?

Well, things got old, fast. Soon enough, Max was blurting the phrase if he got mad at me or Dave. Sometimes, he'd say it angrily. Sometimes, he said it with a smile on his face because he knew he was being obnoxious. Dave and I tried to contain it—we discussed that it was not nice to say that word, to his parents or to anyone. We explained that when he was mad or frustrated, he could say "I'm mad!" We warned him. We took away stuff as punishment.

When we were out in public, some people had no clue what Max was saying. But others figured it out, and would either grin or glare at me and Dave. Worst Ocking Parents of the Year!

I was pretty sure Max wasn't saying the words at the religious program he attends on Sunday. I felt the same about school but, again, I sure wasn't going to ask. That was confirmed when this came home in his backpack the other week: 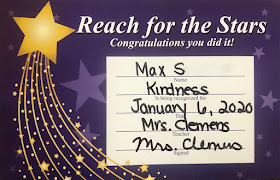 Also: Proof we had done something right as parents.

All that and we were able to use the award as leverage: "Max, you are not going to keep the kindness award if you keep using the f-word!" He stopped saying the words to Janet. His behavior is otherwise fine, and I figure it's a phase that will pass. That or we'll be getting calls from his job coach down the road.

I draw the line at programming "OCK YOU!!!" into his speech app. I think? I dunno. Sigh.

Last weekend, the speech therapist who's seen Max since he was two years old came by for her standing Saturday morning appointment. Before she headed out, we talked about Max's overall progress.  She noted that he was trying, but there were some letters he would never be able to say.

"No, or P," she said. "Anything requiring lip closure."

"F will be impossible for him, too," she said.

At that, I burst out laughing.