His awareness of people with disabilities: a work in progress 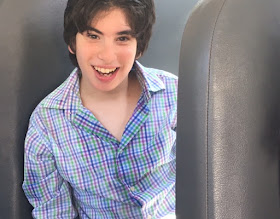 "I'm excited!" Max said, gleefully. We were chatting about his new school. I love how giddy he is about it. He's asked several times if he can visit his old school, so I know he still has pangs about it, but the transition to high school has been pretty seamless.

Then we started talking about Ben going to Tots Class, and I was taken aback by his question.

We had the day to ourselves. Dave has taken Sabrina and Ben to a food festival in Brooklyn, Smorgasburg; Max wasn't up to walking around a lot because of the cast on his foot. We saw Cars 3, which basically enabled me to catch up on email (it was better than Cars 2, although that's not saying much).  After, we had mashed potatoes and grilled cheese for lunch (Max inherited my carb gene), then we did a few errands.

As we were discussing school, I noted that Ben was at the same preschool Sabrina went to when she was little.

"Is Ben going to go to my old school?" Max asked.

Max's old school is exclusively for students with disabilities.

We've been talking about his cerebral palsy for several years now, starting when he was 10. Back then, he knew Sabrina didn't have CP but thought Lightning McQueen did. His understanding has evolved and he now gets that sometimes his muscles don't do what he'd like them to do because of the CP.

Evidently, though, Max didn't see his peers at school as having disabilities.

My mind whirled. Should I point out to him that his old school is only for people with disabilities? And his new one, too? Would that be good for him to consider? But why should I change his perceptions of his peers, peers in wheelchairs and peers with Down syndrome and peers who were nonverbal, whom he didn't view as being any different than Ben? Isn't this how I want others to treat Max—just like any person? Then again, don't I want him to understand it's good to own your disability?

In the end, I just answered, "I don't think Ben will go to your old school."

"I think he will go to Sabrina's school," I said.

We left it at that.

There will be plenty of other opps in years to come for bigger discussions about disabilities. That's a good thing, because clearly I don't yet have all the answers. Which makes me a work in progress, too.
Ellen Seidman at 6:42 AM