You don't have to give my child free mac 'n cheese 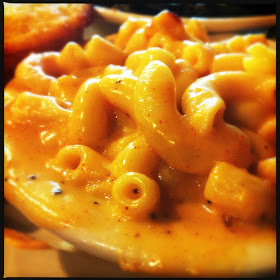 This is the latest edition of the ongoing series "You don't have to give my child free ____." I wrote about the phenomenon last fall, when someone at Dunkin' Donuts gave Max free donuts. People suggested that the DD woman was just offering a cute boy a treat. I thought she felt badly for him. Pity presents bother me.

It happened again over the weekend, this time with mac 'n cheese.

Trust me, Max does not look like a boy on the verge of starving.

We were at a food fair at the Jersey Shore. There was a stand selling lobster mac 'n cheese. "Do you have any plain mac 'n cheese?" I asked, as Max stood by my side and Ben sat in the stroller. "He's not into lobster." Dave was off finding parking; Sabrina was at a party.

"No, sorry, we don't," said the guy at the register. A man standing in the back explained that all the mac 'n cheese was pre-made with lobster.

"I'm sorry," the guy at the register said again, watching Max. A woman standing next to him gave Max a sweet smile.

"He'll survive!" I said, cheerfully. Off we went to find some other food fix, and lo and behold we discovered mac 'n cheese balls, aka fried mac 'n cheese. A veritable superfood!

I sat down with Ben to devour fried potatoes on a stick (almost as healthy as kale!) while Dave and Max cruised around in search of other fine cuisine. When Dave returned, he was holding a container.

"Did you try to get mac 'n cheese for Max?" Dave asked.

Some woman had walked up to him, said "This is for your son," handed him a container and walked away.

"I'll be right back," I said, grabbed the container and walked over to the stand.

People are only being kind when they do stuff like this for Max. But I don't want them to feel badly for him, because it is rooted in the thinking that having a disability is unfortunate. Nor do I want the day to come when Max becomes aware that people give him treats because they think having a disability is a sorry situation.

This is not to say that people with disabilities don't need and deserve accommodations at times—of course they do. For one, we've received passes to bypass lines at amusement parks because Max cannot stand for long periods of time; his muscles fatigue more quickly than other people's do. And of course, there are common courtesies people regularly extend to others clearly in need. When we got to the food tent, a guy noticed the cast on Max's foot and offered him his seat. That's exactly what most of us would do for someone with a cast.

What I'm saying is, giving a freebie to someone simply because they have an intellectual or other disability is other-ing—it's yet another way Max is made to feel different than other people. Why should he go through life feeling that way? If a vendor at a food fair wouldn't have gone out of his way to make plain mac 'n cheese for any child, he shouldn't have done it for Max. And my guess is, they wouldn't have done this for just anyone. I say that based on years of seeing Max be the recipient of such good deeds, and noting the sometimes sorrowful look on people's faces when they interact with him that say, "Here, life is hard enough for you, you deserve a treat."

As Max's mom, I may think life at times is more difficult for him, especially when I see him struggle to articulate a word or grasp an object. But Max doesn't see his life that way—he's just going about his business. And I never want him to think of himself as being a person who deserves perks because others consider his disability lamentable. People have never spontaneously offered his sister, who doesn't have disabilities, free anything for merely existing.

I approached the counter.

"Did you make my son mac 'n cheese?" I asked the guy at the register.

The guy behind him spoke up.

"It was easy enough, I found some cream in the back and made it," he said.

"That was very nice of you, but please let me pay for this," I said.

And of course he genuinely meant that.

I was stuck in the position of seeming ungrateful, but I persisted.

"Really, how much would you charge?" I asked. "You don't have to give it to my son for free. We're glad to pay for it, like any other people."

There is only so much you can get into when you're standing at a booth at a food fair. But I so desperately wanted them to know that Max's life is as happy and fulfilling as any boy's his age. I so wanted them to understand that it is important for Max's self-image, self-confidence and self-respect to be treated like other boys.

Dave and I discussed it later. "It makes me a little uncomfortable," Dave agreed. "We're just there, walking around like any family, and suddenly I'm aware that people are aware of his disabilities."

Where do you draw the line? Just before we entered the fair, Max was standing in awe in front of a fire truck parked on the street. The guy who owned it (a firefighter who decided to buy an older truck) offered to give Max a ride around the block and I couldn't turn that down. Maybe there was pity mixed in there. I guess I didn't have second thoughts about it because it wasn't something this guy was asking anyone to pay for.

In the end, I thanked the mac 'n cheese people once again and left without paying. Max really enjoyed it, so much so that he saved some to take to school on Monday.

It's stayed on my mind. Yesterday, I looked up the catering company that owns the stand and sent an email thanking them and letting them know how much Max enjoyed the mac 'n cheese. I noted that sometimes, people feel sorry for Max but that it's unnecessary because he leads a great life. I said I never wanted him to think that anything is "wrong" with him. I offered to pay or make a donation to a charity of their choice. I hope I'll hear back.

Maybe I once again seem overly sensitive. Horrors! Nice people give your child free mac 'n cheese! And donuts too! No doubt, offers of tasty treats sure beat stares and discrimination, which we've also experienced over the years. Of course, these gestures are well-intentioned. People aren't thinking of anything but doing good.

As the years pass, though, I hope awareness continues to grow about treating people with disabilities like any other people. I hope when I write about these stories, it gives people food for thought. If you wouldn't give a freebie to a child or adult without a disability, please don't give it to my son. Maybe Max won't get the custom-made mac 'n cheese at the food fair, but he'll benefit from something even better: He'll be just another face in the crowd.