"Be nicer to people, President Trump!" An interview with the stars of Born This Way 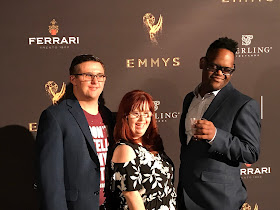 I recently got an opp to interview a few of the stars of Born This Way. As on TV, they spoke their minds and hearts, sharing thoughts on raising children with Down syndrome and bullying—along with a few choice words for our president.

The series, which follows the lives of a group of young adults with Down syndrome living in Southern California, has raised awareness and busted stereotypes about having a disability, and helped people see why inclusion should be the rule, not the exception. It racked up six Emmy nominations this year, including one for Outstanding Unstructured Reality Program (which it won last year).

The cast continues to score individual successes. Sean McElwee has started his own clothing line, Seanese. Rachel Osterbach is pursuing her dreams as an actress. John Tucker, an aspiring rapper/musician, is working on several original songs and will be collaborating with DSON, a rapper. The three also do speaking engagements, both in the U.S. and worldwide.

Here they are, not holding back.

Born This Way has helped people better understand what life with Down syndrome is like. But what do you think people still don't get?

Rachel: "I think that people still do not understand that people with Down Syndrome can really live independently."

Sean: "Probably that we have help to do the things we want to do and I have a job coach, a supported-living staff and they drive me places and help me shop and everything. And Chef Gino helps me cook too."

John: "Born This Way has helped people see that even though we have Down syndrome we have goals and dreams. We are just like everyone, we want to succeed."

What advice do you have for parents raising children with Down syndrome?

Sean: "Let your kids try things they want to even if you don't think they can do it because they might be able to with practice. My mom and dad helped sign me up for things I wanted to try like singing and dancing and sports and acting. And I couldn't even talk very good but she signed me up anyway."

John: "Be patient and helpful with a child even if it seems their dream is unattainable. Try harder, you will get a answer one way or another."

Rachel: "My advice is not to be scared—don't limit your child, give them a chance to be included in the world and to show what they can do. My parents have always loved me for who I am, and that is the most important thing."

If President Trump were to appear in an episode of Born This Way, what would you tell him face to face?

John: "It's not fair to make fun of people with disability. It hurts."

Sean: "I would tell him not to take away my services that help me be independent and to not be rude. And I would tell him to let me be the next president and show him how to respect everybody."

Rachel: "If President Trump came on the show I would say to him, 'What you are doing in this world is not right. You need to pull yourself together and be nicer to people!' I would talk to him in private about showing people with Down syndrome more respect. I think Trump needs therapy. I think I should be the next president! I will be 35 in December, so after that I can be president."

In recent years, there has been a push to end the use of the r-word. What do you have to say about it?

Rachel: "I do not like the r-word, and people should not use it. It is not nice to say that to anybody—it is really bullying someone when you do that. Someone called me the r-word in high school, they called me a 'retard' and I felt uncomfortable and upset."

John: "The r-word is degrading to anyone with or without a disability. It is as offensive as the n-word."

Sean: "Let's end it. I hate that word. Nobody ever called me that but I hear it and it makes me sad."

UPDATE: Born This Way won two Emmys, for Casting for a Reality Program and Cinematogrophy for a Reality Program. Rachel and John made history by becoming the first individuals with Down syndrome to present an aware at a major televised award show.
Ellen Seidman at 6:37 AM