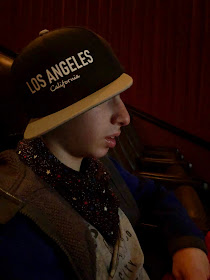 "I want to go to the movie with you!" Max said.

Wow. I felt flattered. It was early evening Saturday and Dave wanted to go see The Joker, but I had no interest. Max overheard us talking and gallantly stepped up to accompany me to a movie.

One of the ways Max lives the teen life is going to the movies alone. Dave or I will drop him off at our local movie theater, where the staffers know him by name. We pick him up at the end. We've come full circle because it's where—tentatively and then triumphantly—he saw his first movie in a theater, Monsters University. That was six years ago.

Max is flexing his independence, same as he does when he takes the occasional walk by himself around our neighborhood. I also like going to movies by myself, and I would have been perfectly content seeing Downton Abbey in the movie theater alone that night. But I loved that Max offered to go with me. He'd actually seen a bit of it already a couple of weeks before—he was supposed to see The Abominable Snowman, but Dave accidentally left him in the wrong theater only to have Max text him in about 15 minutes later, "Wrong movie!"

We settled into our seats. I'd seen a few seasons of the TV series, so I knew enough to enjoy the characters; Maggie Smith is my fave, and she did not disappoint. Max blurted "London!"—he was excited for the British setting, because we'd visited London in April and he had an awesome time. Then he sighed heavily halfway through the movie, and I could tell her was getting bored.

That's typical Max, making sure that I was happy. What a great date.

I did have a few pangs of other teens go out on real dates on Friday night. Max isn't yet into dating, but then, maybe he doesn't know what he's missing. I'm going to see if he'd like me to arrange something with a girl I know he's into, then drop them off at the movies. As much as I enjoyed date night with my boy, I'm betting Max can do better.
Ellen Seidman at 6:40 AM