Celebrating progress, even the dubious kind 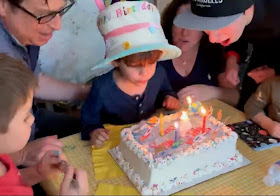 I don't sit around waiting for Max to progress. I no longer have those "If only he'd do ____ and ____ an ____" thoughts like I did when he was younger, because I know that Max will develop on his own timeline, and nobody else's. But when progress happens, I get giddy. Bluebirds circle my head, singing. Each and every time, I am seriously excited...even when the progress is dubious.

That's what happened at Ben's birthday party this weekend, at a crafts studio. After his friends from school made cardboard rocket ships and painted a mural, it was pizza and cake time. I carried the ice-cream cake in from the back, placed it on the table and everyone sang "Happy Birthday." Except when it came time to blow out the candles, Max suddenly leaned right over the table and blew out every single one. A cake bomb, you could call it. Ben burst into tears.

"Do-over!" I announced, hugging him and shooting Max a look.

"Don't blow out the candles!" I told Max as we relit them, everyone sang Happy Birthday once again, Ben happily did the job and Max held himself back.

Obviously, this was rather obnoxious of Max. For good measure, he'd told Ben, "No California for you!" which is what he says when he wants to be mean. As in, "I'm going to move to California and YOU'RE not!" I guess he didn't appreciate Ben having all the attention.

But as I sliced the cake it occurred to me:

MAX BLEW OUT THE CANDLES.

MAX BLEW OUT THE CANDLES.

And I had to smile. A closer review of the video made it clear that Max had exhaled through his nose, not his mouth. But still: this was a feat of breath control previously unseen. He'd never blown out all the candles on his own cakes.

It wasn't something to congratulate him for. Later, we talked about how when it's someone else's special time, Max needs to respect that.

"Child blows out birthday candles with nose" is not a milestone you would read in any development book.

#PROGRESS
Ellen Seidman at 9:37 AM