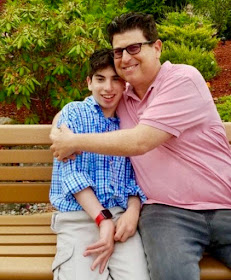 "Daddy's so nice!" Max often likes to announce, out of nowhere.

And he is. The thing is, Dave isn't just dad—he is Max's best friend. The reality of Max's life is that he doesn't have friends to hang out with after school or on weekends, like other kids do. It's the way things are. Max is perfectly content with this relationship. Dave, too.

Together, they like to visit Max's home away from home—that would be Home Depot—where Max zooms around a cart and eyeballs appliances for his fantasy home in Los Angeles as Dave hangs at the Dunkin Donuts where the guy knows him by name. They'll head out to a steakhouse for lunch or dinner, because Max is currently obsessed with steak and needs to gain some weight, so, yes to creamed spinach too! (Dave is good at finding Groupons so we don't have to take out another mortgage for Max's steak phase.)

They'll go out for shakes, just because. Or to a movie. They'll go for a ride at a race track. They'll hit local fairs or our town's annual music festival and stay out too late. One night, at around 8:30 p.m. when I was beginning to wonder where they were, Dave texted me a picture of Max on a reclining chair looking blissed out: They'd gone to get foot rubs.

They have been on boys' trips to Chicago and Las Vegas (especially because Max wanted to check out the fire trucks he'd seen on YouTube), along with Orlando and Los Angeles.

Daddy is also his hair stylist. Before they have a night on the town, Dave is the one who smooths gel into Max's hair. Max and he will come down the stairs looking all duded up, just two guys ready to have a good time.

Neither Dave nor me could have envisioned this relationship when Max was a tot. For one, he couldn't handle new places, mainly because he had sensory issues and the noise and hubbub were too much for him. Max has mostly outgrown the sensory stuff (going to Monster Jam last weekend was a milestone of sorts). Max also had limited communication skills back then. And now, these two talk up a storm.

They've had a whole other level of connection in recent months, thanks to Max's Apple Watch. We got it for him so we could keep track of him on bus rides or when he's out for walks, and to enable communication since holding a phone and typing on it isn't yet in his repertoire of movement. He now texts Dave constantly: to let him know about weekend plans, tell him what he's up to or inform him that he'd like, wait for it, steak for dinner.

Maybe they don't do "typical" things fathers and sons do, like go on hikes or go for runs or toss a football around in the backyard. But as Dave and I have learned, typical is overrated and their outings and adventures are their normal. Maybe people who don't know better look at them and think, Awww, that man is awesome for being there for his son with disabilities. But the reality is, Dave doesn't think of Max as his disabled child—he is his awesome older son, period. Dave enjoys their outings as much as Max does. He enjoys Max's company as much as Max does his. They are true friends. And I will spare you the details of their fart jokes.

Dave was on a business trip this week and called in the other night.

"Hi, Daddy!" Max said. As usual, Max had texted him throughout the day—on his bus ride to school, during lunchtime, on the bus ride home, when he got home, before he ate dinner.

"I love all your texts, Max!" Dave said.

And he meant it.

Happy Father's Day to the best Dad.
Ellen Seidman at 10:18 AM