Max had a whole lot of thrills this weekend, courtesy of Monster Jam. He'd decided he wanted to go a couple of months ago; I was skeptical. This is a boy who used to run out of restaurants, screeching, because they were too loud for him. He's come a long way but still: Monster Jam?! Max was so confident, he said he didn't need his noise-blocking headphones (Dave brought them anyway, just in case).

Things started with an early access Pit Pass at the MetLife Stadium in New Jersey, where Max got to greet drivers, check out trucks up close and even ride in one. As the show started, Max decided it was going to be too loud for him. I considered this progress—being able to advocate for your own needs is key for Monster Jam and life in general. After Dave talked with Guest Services, the two of them were shown to a suite. And then Max sat mesmerized for the next three hours. "He literally did not tear his eyes away, except for eating ice-cream," reports Dave. "When the cars jumped, Max would yell 'YEAH!' He was so into it."

I'll let Max explain it in his own words. So proud of this boy and his monster spirit.


I went to Monster jam with daddy 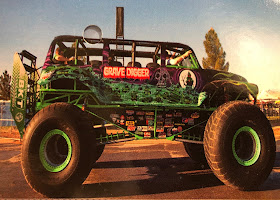 There were a lot of big trucks 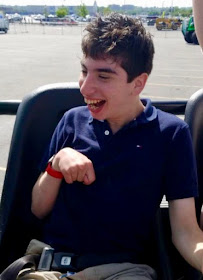 I rode in a big green truck. It was very so fun.

It was a little loud I was inside. 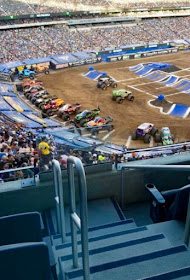 The trucks went up in the air there was fire. 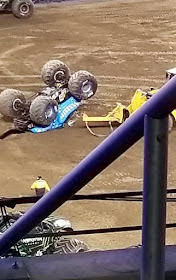 I ate cheesesteak and ice cream.

I liked it a lot. I'm going back next year.