An autistic and blind singer wows America's Got Talent, and one very important person, too 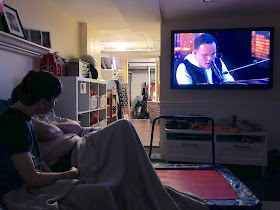 At 8:45 last night, we woke up Max and Ben and headed to the basement with Sabrina because of a tornado warning for our area. We skipped the dire weather reports and caught the end of America's Got Talent. It turned out to be one very memorable show.

A guy with a cane walked onto the stage, accompanied by a woman. He introduced himself, Kodi Lee. He said that he was 22 years old and he was going to sing a song on the piano. The woman, his mom, noted that he was blind and autistic, that he'd responded to music since early in his life and that music had been healing.


Then Kodi sat down at the piano and blew everyone away with his rendition of "A Song For You" by Leon Russell.


The judges gave Kodi a standing ovation. Simon praised the beautiful tone of his voice. Howie Mandel called him "a great inspiration." Kodi got the golden buzzer from Gabrielle Union, guaranteeing him a place in the semi-finals. Backstage, she proclaimed, "You just changed the world."

Kodi certainly was all sorts of incredible. But it is demeaning when people consider ones with disabilities "inspiring" or amazing for being themselves, as came up recently when a young woman with CP made headlines for graduating college. You never hear a judge on any of these talent shows say that someone is "inspiring" unless they've made it through some really unfortunate circumstances, like being homeless or having a serious illness.

But people with disabilities aren't unfortunate or tragic or any of that. They've got abilities and aspirations and talent—just as the 2018 winner of Britain's Got Talent, comedian Lee Ridley, showed (he has cerebral palsy). I sure hope that Kodi is enabling a gazillion more people to see that you can be disabled and be a star. I was especially excited to watch Kodi make an impact on one particular person: my boy Max.

Max watched Kodi Lee perform in total awe, speaking up only to mention that he resembled a school friend. When he was done, Max asked if he could go to the theater and hear Kodi sing. "He's very good!" he said, his eyes shining in the dark. I hope it was the same for other kids and teens with disabilities.

Max's relationship with disability continues to develop. "He doesn't care that he has a disability—he just does his thing," one of this teachers mentioned recently. Although Max is well aware that having cerebral palsy can make certain things challenging, especially when it comes to using his hands, he doesn't think of himself as different from other people. Which is THE most amazing thing, and exactly how I'd like people to perceive him although that doesn't always happen; he remains the recipient of pity stares and the occasional "awww" when I say that he has CP. Society still has a long way to go in terms of not just accepting but understanding that people with disabilities are, well, people. 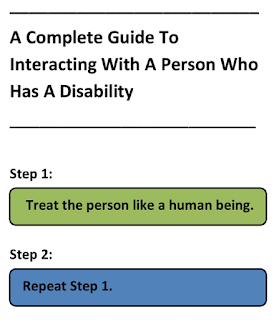 This is all the more reason why I want Max to be inspired by adults with disabilities. I'd like for them to show him the possibilities that lie ahead, and help him perceive that people with disabilities contribute as much to this world as any person does. And now, he has a new role model.

Last night, as it stormed outside our house, Max basked in the glowing performance of a gifted singer and pianist with disabilities. And it was awesome.
Ellen Seidman at 9:25 AM