Yes, I'll happily drive around so you can wave a flag out the car window 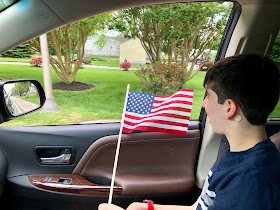 Max discovered a new favorite pastime over the holiday weekend and it is called: I drive him around as he holds a flag out the car window.

It started when he decided that he wanted to walk in a Memorial Day Parade. Last year, he marched in our town's parade. This year, we were down at the Jersey Shore and he kept talking about it. On Sunday, Sabrina and Ben hit the pool but Max wasn't into it. He'd generally rather drive around, go on a Monster Truck ride, eat ice-cream, check out the kite show and eat more ice-cream. He's not much into the beach.

We've been visiting Wildwood, NJ, since Max and Sabrina were little. Back then, Max's hobbies included wheeling a luggage cart around the cavernous garage and sliding the shower door open and closed. It was hard to keep him otherwise entertained because when he fixated on doing something, he only wanted to do that. Dave and I would take turns trotting around the garage with the luggage cart and trying to detract Max from the shower door. Max's interests have expanded but there are times when he still gets really into doing just one thing, as happened with the flag.

I stopped at Bed, Bath and Beyond, where spotted a small flag and we bought it. After, I ducked into Marshall's and he stood outside, waving it in the breeze. Then we visited a local fire station where he met Firefighter Jim, aka Meatball, who said he'd be driving a truck in the local parade the next day. Max was angling for a ride, but decided he'd find a way to walk in it. We agreed that would be a good way to honor the people who'd fought for our country.

As I drove back to our place, Max opened his window and stuck the flag out. He really enjoyed the feel of it fluttering in the wind. Just as I was about to turn in to the driveway, he asked to drive some more. So we cruised around for another half hour. On Monday, Max grabbed the flag and we went out for breakfast. As the rest of us were finishing up, he headed outside, stood by the curb and held it up. Cars honked at him, which Max thought was awesome.

And then. the parade. Dave and Max ambled off and next thing I knew—after the band and Girl Scouts and Cub Scouts and fire trucks passed by and I'd waved at Firefighter Meatball—there was Max walking by, happily waving his flag. 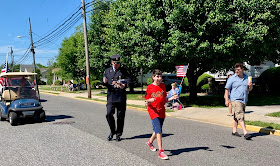 Later, we headed out to miniature golf but Max wasn't into it so I took him to get ice-cream. His flag stick snapped in half in the shop's door and I replaced it with a larger one from the nearby five-and-dime, which seriously excited him. He kind of looked like a tour guide as he walked down streets, flag held aloft. (Also: I'm always happy anytime he raises an arm up high—way to flex it!) He stopped by another fire station to say hi, toting the flag, and they were impressed by his patriotism.

Max got to stay at the beach an extra day because he has a bonus day off school today, thanks to an unused snow day. Dave is with him and I have a feeling they will be doing some flag driving. We're cool with that. You do what makes your kid happy. Max has no self-consciousness whatsoever about walking down streets, waving his flag. Wouldn't it be great if we all felt so comfortable letting our flags fly.

In the scheme of stuff Max has been into, including car washes and Lightning McQueen merchandise, we're getting off cheaply (well, aside from his current steak obsession and the fact that he wants to move to California). This is also relatively easy: get into a car, open the windows, drive. I'm just hoping the thrill wears off before winter arrives.
Ellen Seidman at 7:45 AM