Is it wrong to force your child to have fun? 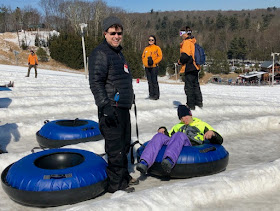 AAAAAAAAAAARGH! That was the sound of Max standing at the base of a tubing hill and screeching this weekend. Perhaps you heard him?

Max had been totally gung-ho about going. Miraculously, all of us managed to make it out of the house at a reasonable hour in the morning and grab breakfast and not even fight in the car (well, not too much) before we got to Camelback Mountain in Pennsylvania. I'd heard great things about the tubing—they have double tubes, so Dave or I could slide down with Max. Plus they had a conveyor belt to haul you and your tube up the mountain, so no shlepping necessary.

For some reason, the double tubes weren't in use on the day we went, but we could put together two singles; Dave would hold Max's rope, and Sabrina or I would hold Ben's. We got tickets and headed over. Just as we made it to the front of the conveyor belt line, Max got upset. Then the screeching began.

Dave and I weathered a lot of meltdowns when Max was younger, so we weren't that flustered or bothered by the stares. Dave held onto Max's arm and kept saying, "Come on, Max, let's just try it once." We looked at each other, and we knew: If Max could just get up to the top of the mountain and try tubing, he'd like it. This as '80s music blared in the background: "COME DANCING, ALL HER BOYFRIENDS USE TO COME AND CALL, WHY NOT COME DANCING, IT'S ONLY NATURAL!"

Like any teen, Max deserves to have his voice heard and his wants and needs respected. But Dave and I know that if we can help him get past that hump of fear, he inevitably does OK. And so, we coax, wheedle, nudge and tug. Preparing him doesn't usually help; I'd shown Max videos of people tubing and photos of the resort. He'd seemed into it.

I have in mind an article in The Washington Post a year ago that raised controversy, an excerpt from writer Whitney Ellenby's book Autism Uncensored about forcing her son with autism to sit through a performance of Sesame Street Live. It took more than a half hour, and involved squeezing him between her legs to control him. Autistic adults were horrified: Although Zach eventually did sit and watch the show, some felt this mother had traumatized him and used unnecessary force. When Ellenby spoke with Zach's doctor after the episode, though, he felt that she had broken the pattern of negative reinforcement.

I am not questioning the wisdom of autistic adults. There are no easy answers here, though I believe that the majority of parents operate with the best of intentions. Over the years, Dave and I have been that mom and dad cajoling Max into shows, events, restaurants, family gatherings, whatever and wherever. (Good noise-blocking headphones really helped.)  I do not condone the use of force—but would Dave tugging Max toward that conveyor belt count as force, in some people's eyes? Perhaps. Yes, we have literally pushed Max into doing stuff and hugged him tight to help him feel comforted, because we know his m.o.: resist, give in, enjoy.

That's exactly what happened that morning. Dave kept talking quietly to Max, squeezing his shoulders and leading him toward the conveyor belt. "Max, it's not scary, you'll really like it!" Dave said. And suddenly, there was Max on that conveyor belt, calm. Sabrina, Ben and I were a few people behind him and Dave. Max When they got to the top of the hill, Max seemed fine.

There are plenty of clear-cut rights and wrongs with parenting. And then there are those gray areas where you're just going on instinct and experience, trying your hardest and hoping for the best. It's true of any parents, of course, yet when you're dealing with a child having a sensory meltdown, things feel even more acute. There is definitely a point of no return; Dave and I have taken turns hanging outside restaurants and shows with Max over the years. As Max is maturing, though, I think there is a growing awareness that he's been through stuff like this before and he'll be OK. I'm betting that's what partially enabled him to calm down relatively fast.

When Dave helped Max settle into the tube, he looked a little dubious but then they were off and sliding and Max laughed and laughed. When Sabrina, Ben and I got to the bottom of the hill, Max grinned one of his big grins and headed back to the conveyor belt.

We all went up and down about 10 times.

Max wants to go back next Friday.