Props to this restaurant's response to intolerance of people with disabilities 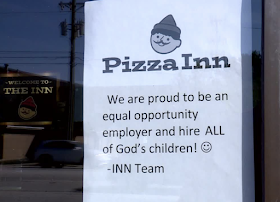 Pizza Inn in Greenville, South Carolina is known for its excellent pies, including the pizzert (cinnamon-and-sugar frosted pizza). Online reviewers give it props for the "attentive," "nice" and "friendly" staff. Many people also appreciate the restaurant's inclusiveness: 10 out of the crew of 16 have disabilities. Many customers also appreciate this sign that hangs on the restaurant's front door:

We are proud to be an equal opportunity employer and hire ALL of God's children!

Owner Amanda Cartagine put it up following a customer complaint. The person had asked a staffer with autism to refill the lettuce bowl at the salad bar, and he was not satisfied with the service. A manager filled him in, explaining that this staffer hadn't been trained to refill the lettuce bowl. And the man had the gall to suggest to the manager that Pizza Inn put up a sign cautioning people about the staffers with disabilities. So Amanda took him up on his signage suggestion. 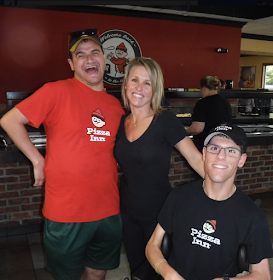 "These are like my kids—and it made me angry, but I wanted to do something that was not rude but that got my point across," Amanda told WYFF.

You have to be a pretty sad person to be intolerant of employees with disabilities. Here's to people like Amanda who serve up humanity, equality and respect.