File under: the mom bullying has got to stop 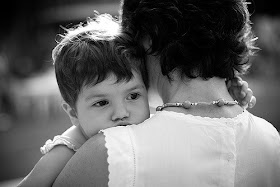 My friend Julie posted a rant on Facebook the other day, and rightfully so. She'd been grocery shopping and came upon a woman with a little boy who was screaming at the top of his lungs. The mom kept talking to her son in a quiet, calm voice but he grew increasingly agitated. He threw his sippy cup down and shouted, "You are the stupidest mommy in the whole wide world." Julie wanted to approach her, because Julie is lovely and caring that way, but backed off when she saw an older woman approach and continued shopping. Soon, the shouting stopped.

"I caught her eye and flashed her a thumbs-up," Julie wrote. "'Good job, mama,' I said with a smile...but I saw tears start streaming down her cheeks. As I grabbed her in a hug, she quietly sobbed, 'That woman just said my son was spoiled!' I said, 'Don't listen! You are doing a good job. My son was the exact same way and he's totally fine and chill now. You're doing great!' Why did that woman feel the need to approach and tell her that her son was spoiled, even if she thought so? Why can't people comfort rather than criticize, help rather than hurt, open their arms rather than point fingers? Moms have it hard enough without being judged by strangers every minute."

I cheered Julie on from my couch as my heart went out to the mom she'd encountered. I have been that mom weathering a child's meltdown, as have many, many other moms of children with sensory issues (and many moms, period). I have dealt with angry glances, tsk-tsking and comments I've overheard such as, "Why can't she learn to control her child?" Who knows: Perhaps the child in that grocery store had sensory issues or other challenges. Even if he didn't, there was no excuse for the other woman's behavior.

To me, strangers who publicly rebuke moms for their children's behavior isn't just shaming—it's harassment, tyranny and torment. It's mom bullying.

It is very hard, in the moment, to respond to these bullies. You're already on your last nerve. You're concerned about your child. You're feeling vulnerable. And then someone pounces and it is all you can do to not throw yourself down on the floor and wail, too. Mostly, I've ignored the stares and glares. At times, I have returned the evil eye. Once, I blurted "I'm doing the best I can" which clammed the pissy man in the seating area of the airport right up.

Nobody knows the reason behind a child's meltdown except the parent (and even then, sometimes it's a total mystery).

Nobody has the right to make assumptions about a child.

Nobody has the right to make assumptions about a mom or dad's parenting.

Mom bullies of the world: Back. Off.

Image: Flickr/davide
Ellen Seidman at 6:50 AM