The special joys of your last child 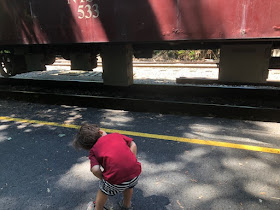 "Are you having a completely different experience than you did with Max?" the woman asked me. I knew her from our area; we'd bumped into each other in the park as Ben was climbing the jungle gym. I understood the meaning of the question: Because your first son has disabilities, is raising a child who doesn't have them very different?

"Yes—and I had a completely different experience with my daughter, too!" I told her. "Raising every kid is a whole other experience. But honestly, I think the main thing that makes this time around feel so different is that we're experienced parents, and we know he's our last child."

It's true. What's making parenthood the third time so distinctive is because we know we're not having any more kids, and we're relishing the big and little moments with Ben. We took him to A Day Out With Thomas over the weekend. It was the highlight of his young life, but I think there's a chance Dave and I enjoyed it even more.

We didn't tell Ben we were going, we just surprised him. At first he couldn't even smile, he was so awestruck. But when we went on the 25-minute ride to and from nowhere  (aka Sodor), he was gleeful. I'd brought along his Thomas whistle and he blew it happily, making the kids seated behind us laugh. 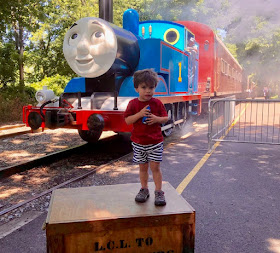 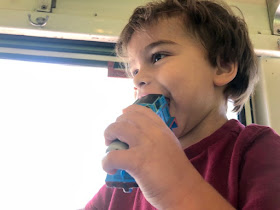 I felt giddy watching him enjoying himself. I giggled when he did at the puppet show. I felt like I was seeing the world anew through his eyes. I marveled at just how absorbed he was in the tent that had several Thomas tracks with trains chugging around them.. 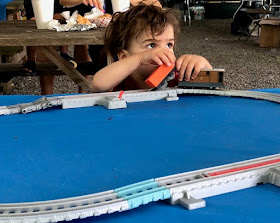 I've been down similar roads before. I can still remember the exact smile on Sabrina's face when she met the princesses in a little room at Disney World, and how Max looked when he first encountered Lightning McQueen in Cars Land at Disneyland. (He liked Thomas enough, but his true love was Lightning). As a parent, your children's joys are your own. But it's been a while since we experienced the pure joy of meeting a favorite character, and we know all too well how fast the time goes by and suddenly your children have developed entirely new obsessions (like, say, overpriced teen costume jewelry and moving to Orlando).

And so, we savor the moments: reading to Ben at bedtime, watching him "swimming" in the pool, hearing his made up words ("LOOKIT! A bug!"), appreciating his art projects, celebrating his "I did it!" moments, seeing him try new foods (he's taken to asking "Is it spicy?"), pushing him higher and higher in the swing as he says "To the sky!", cherishing the naughty-yet-hysterical things he does, like how he says "Sorry!" right before he pushes entire stacks of papers off the kitchen counter. I am fascinated by his habit of lying on the floor and rolling trains back and forth and back and forth. I lie down and watch him, too. 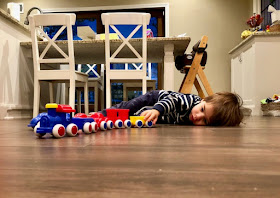 When I pick him up from camp on Mondays and the counselor walks him out the door and he trots down the path and says "Hi, Mommy!" so excitedly in his sweet little voice, I melt. There are times when we are driving in the car and I take his hand (he likes me to sit in the back seat with him) and just stare at the little indents where knuckles should be and the line around his wrist that is still there but will soon go away. Dave and I get a little sad with his development; he used to say "onish" for ocean and lotion, but now he says them correctly. We will likely be despondent when he quits asking for a "bottie," his word for a cup of milk; stops confusing his pronouns (he'll say "carry you!" for "carry me!"); and no longer refers to himself in the third person ("Ben likes football!" "Ben likes chocolate!") Soon, he'll be toilet trained and so long, diapers. And while I can't say we will miss the blowouts, those times when we stare down at him on the changing table are irreplaceable.

And the way he runs, not walks, everywhere.

And how his lashes look when he cries.

And how his mouth looks like he is sleeping and how he sleeps with his butt in the air and the way he holds his hands up for me to take him out of the crib when he gets up.

And the way he adores having his feet rubbed while he sucks his thumb.

And the way he looks in his little collared shirts.

And his little socks.

And his sun hats.

And how he announces "Ben goes pee pee in the potty!" when he's done.

And the way he sucks on the toothbrush instead of brushing.

And how he throws a ball, with all his might.

And how he says "Mommy, help!" when he needs a hand climbing in the park.

Oh, there are so many little things he does and says and as in the moment I may be, there is that voice in the back of my head saying that soon this will pass, making me appreciate just how precious it all is. 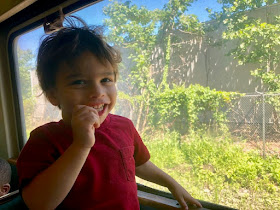