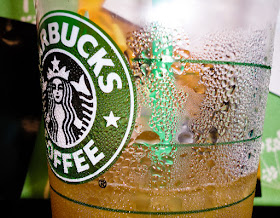 Following on the heels of Seattle's ban of plastic straws and utensils, yesterday Starbucks announced that it would eliminate plastic straws by 2020 in all 28,000 of its stores worldwide. Environmental advocates were excited, as the straws are not recyclable. But it was not good news for people with disabilities, who depend on flexible plastic straws.

Max has yet to master drinking from a straw; the cerebral palsy, which impacts his oral-motor function, makes sucking up liquids and swallowing a challenge for him. He works on it during speech therapy sessions and with us, too. We like the straws at Starbucks; they're pretty sturdy. Ditto for the ones from Burger King. Both come in handy for practicing. Not that I know any mother who'd swipe straws so her child could succeed in slurping.

Starbucks says that straws made from "alternative materials—including paper or compostable plastic" will be available by request for customers who prefer or need a straw. But they could be problematic for people with disabilities.

It takes Max a long time to practice drinking with a straw, which is why paper ones won't work—they'd get soggy and could disintegrate in his mouth, posing a choking hazard. He also can't control his bite so well, and could chomp off a piece of a paper one and choke on it. The same goes for adults with disabilities. Some people who have issues with coordinating swallowing drink through straws for safety reasons; a straw can facilitate swallowing so that a person doesn't aspirate and get liquid in their lungs, potentially leading to pneumonia.

"Metal, glass and bamboo straws present obvious dangers for people who have difficulty controlling their bite, as well as those with neurological conditions such as Parkinson's," writes Jamie Szymkowiak, cofounder of the Scottish disability rights group One in Five, in a guest post for Greenpeace. "Some disabled people use straws when drinking coffee or eating soup, yet most of the alternatives—including the leading biodegradable straw—are not suitable for drinks over 40 degrees." Carrying around a reusable straw isn't an option for adults with disabilities who may have issues cleaning it.

Banning straws is trending. The EU recently banned plastic straws and utensils. Starbucks' proposed replacement, strawless lids with a raised part (they've been called "adult sippy cups") aren't going to be an option for people who have issues grasping a cup or controlling the flow of liquid. 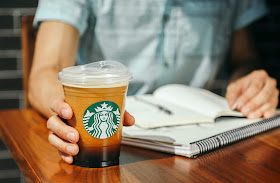 Eliminating straws came in response, Starbucks says, to requests from partners and customers. Says Colleen Chapman, a Starbucks v.p. who oversees sustainability, "Not using a straw is the best thing we can do for the environment." That may be true, but coming up with eco-friendly straws that are sturdy yet flexible and can be used in hot and cold liquids is the best thing you can do for the planet and people with disabilities. Ditto for roping them into a discussion about what works for them.

One of Max's favorite weekend activities is stopping by Starbucks for a milk fix. Straight up. Cold. Starbucks is one of his happy places. I'd like to think it will continue to be welcoming to him, and all people with disabilities.

Images: Sarah Miller, Flickr/courtesy of Starbucks
Ellen Seidman at 6:37 AM