Sometimes, it's hard to imagine people who aren't like you, but that's no excuse not to care 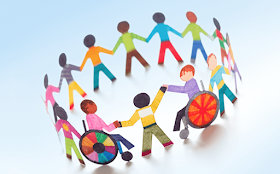 Until I had Max, it never occurred to me that a baby could have issues with drinking or eating. But Max did. The cerebral palsy impaired his ability to suck and swallow. When I nursed him, it could literally take an hour. When he started taking bottles, we had to place multiple diaper cloths beneath his chin and over his chest to absorb the milk that would dribble out of his mouth. When began to eat baby food, it would also take a very long time because he would thrust out a portion of the spoonful and we'd have to spoon it back in.

Before Max came along, I really didn't know much at all about cerebral palsy or how it could affect a body's function. I'm thinking about this today because of the reaction to the news that Starbucks will be ditching plastic straws and instead offering up paper or compostable ones to those who need them.
A lot of people out there didn't get what the big deal was for people with disabilities, although parents of children with disabilities and adults with disabilities did our best to explain it.

I understand why people don't get it, because I was once that person—but it was disturbing that some people were being downright ableist.

People questioned: Why can't people with disabilities bring their own straws to Starbucks?

Well, because if you're forking up the bucks for a Starbucks drink, you darn well deserve to be able to drink it without BYO-ing anything. The onus shouldn't be on the person with disability to figure out how to consume a $4.00 latte.

Others questioned: Don't people with disabilities care about the environment?!

Heck yeah, of course PWD care about the environment, but they also need to live their lives. Announcing that a tool that's vital to their existence will be disappearing without offering an equivalent replacement isn't OK.

And yet more wondered: Why is this another battle that has to be fought?

I'm not a PWD—I'm the mother of a child with disabilities. Still, if I point out that plastic straws are useful to my child with cerebral palsy, and ask for Starbucks to come up with an eco-friendly version because they're planning to get rid of them, there is no reason to question or oppose me. Same goes for people with disabilities who've spoken out about this. There's no ulterior motive here, no desire to be oppositional for the sake of being combative. What's at hand is a basic human need, and a basic human right.

For sure, I have a whole lot of other stuff to content with and battles to fight to help my son. But people with disabilities deserve to have access to all things in life, frappes included.
Ellen Seidman at 11:32 AM