The report card I never thought I'd see 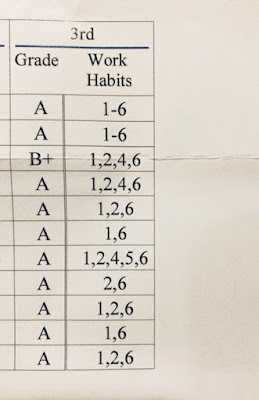 Max's report card came in the mail last week, while we were away for a few days. I opened it up last night and squealed: almost straight A's.

This is the first year in Max's academic history that he's gotten grades; in elementary and middle school, he received scores that reflected his progress toward the goals in his IEP (I = Introduced, LP = limited progress, P = Progress, A = achieved, etc.). This report card also touches on work habits: 1 = completes assignments; 2 = attentive and follows directions; 3 = works independently; 4 = demonstrates initiative; 5 = organizes time and material; and 6 = participates in class.
I had one of those if-the-NICU-doctors-could-see-him-now moments. Oh, they were so gloomy and doom-y. I also had one of those if-the-me-back-then-could-see-him-now moments. Because the doctors' gloom and doom seeped into my heart and head, drowning my hopes and leaving me filled with anxiety about what the future held for my boy.

While I have learned not to pay that much attention to standardized tests that measure Max's aptitude, since they do not reveal his true capabilities, it was a thrill to see all the great grades in his report card. He's away at camp and I'm excited to show them to him when he's back.

Max's grades are mostly a reflection of his effort and enthusiasm in class, his homework and projects; he does not get tests. He never has, actually. This has given me pause over the years; why shouldn't Max be expected to prove his knowledge, as students in mainstream classes are? Why shouldn't he reap the satisfaction of showing how much he knows? The tests wouldn't have to be lengthy. They could even be done orally, or administered some other way.

I dealt with the other end of the spectrum last week with Sabrina. Her grades came out, and while they were overall really good I contacted the middle school director to question one. I was told that 90 percent of the grade was based on tests, plus 5 percent for class participation and 5 percent for homework. That made me fume; why put so much emphasis on tests? What does that teach students?! This is not some high-pressure Fortune 500 gig, where only results matter; these are the formative years of middle school, where teachers should be instilling confidence, applauding effort and encouraging enthusiasm for learning.

I remain dubious about Max's lack of tests.

I remain concerned about teachers who think tests are the end all, be all.

I am really, really glad it's summer.
Ellen Seidman at 6:40 AM