Fourth of July fun for kids and teens with sensory needs 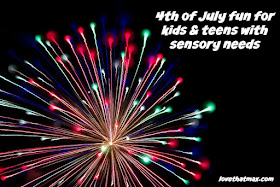 Our town has a fireworks display in the park every year. Families spread out blankets and chairs across the lawn and picnic until the display starts. We have never been one of them—well, not all together, anyway. Max cannot handle fireworks. While he's outgrown a lot of his sensitivity to noise, they are still too loud for him to handle when he's nearby, even though he's interested in them.

Thanksgiving, Christmas, Chanukah, Easter, the Fourth of July: whatever the holiday, it can be hard on children and teens with disabilities. Routines get upset, there's a whole lot of hustle and bustle and, come the Fourth, crowds, loud noises and flashing lights. These times can be challenging for us parents, too, as we have to uproot ingrained ideas of what a "great" holiday means.

Like other families with children who have sensory needs, we've found that the best way to celebrate is with alterna-traditions. We've watched the fireworks on TV and had ice-cream. In other years, Sabrina and I went to the park while Dave parked the car blocks away from the park and he and Max watched from there. Last year, the two of them sat in town outside the fro-yo shop; they basically had the street to themselves because everyone was in the park. Max downed his usual fix (chocolate and vanilla swirl) and watched the sky light up.

Some parents find that noise-cancelling headphones do the trick, even better if you can play music through them. Some just do drive-bys. Others celebrate with sparklers at home. Whether or not you have a child with special needs, there's a lot to be said about staying in. As my Facebook pal Rick puts it, "Usually the Boston fireworks and concert is televised, and I like watching the show in my nice air-conditioned living room rather than in the huge crowd on the esplanade!"

This Fourth of July, Max and Sabrina are away in camp, and we'll just have Ben around. People in our area were lighting up fireworks last night and the poor little guy woke up, shrieking, because he was scared. So it looks like tonight, we again won't be one of those families on the lawn—and that's perfectly OK. Maybe we'll do the fro-yo thing. Maybe we'll watch them on TV. Maybe we'll park the car somewhere and watch from afar. Maybe we'll come up with a whole other idea.

Whatever we do, it'll be our own kind of fun.

Here's to having your version of fun on the Fourth.

Image: Flickr/StevenTulanay
Ellen Seidman at 9:30 AM