Breaking: Someone else in our house noticed crumbs 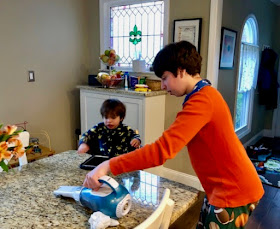 Last week, I noticed a circle of black stuff on the kitchen floor. Then I realized it was moving. Upon closer inspection, it turned out to be a cluster of baby ants gathered around cookie crumbs. I decided to just leave them be for a couple of hours, as a little experiment, to see if anyone else noticed. Dave, Sabrina, Max: They all passed through the kitchen. Not a word. Ben was too busy doing laps to spot them (he runs, not walks, everywhere).

I wasn't surprised. My children have chores but typically, nobody in my house ever picks up anything off the floor—crumbs, socks, books, magazines, toys, empty cups, bugs dead or alive—but me. (Although there was that one time when Dave spotted baby ants on our kitchen table and emailed me about it on a Saturday night while I was out at a party.) (And yes, we get ants once warmer weather hits, got any ideas?)

You can usually find me puttering around at about 10:30 p.m. on any given evening, cleaning up after everyone and particularly after people named "Ben," who has a thing for crackers and also a thing for gleefully grinding them into the floor/the couch/wherever. At two years old, Ben is a whirling dervish of destruction.

Me, I need neatness (or some semblance of it) for peace of mind. It's a lonely struggle, this clutter-busting. But I may have found a kindred spirit.

As I was about to grab the Dustbuster, Max said, "I'll do it."

I wasn't sure I'd heard him right. Did I mention that nobody picks up around here?

"I'll do it!" Yes, he was definitely saying that. Before, he'd noticed me yawning (Ben had been up part of the night before with a virus) and asked if I was tired. Maybe he was taking pity on me? What suddenly compelled him to clean up crumbs?

Whatever! I handed him the Dustbuster and let him have at the peanut butter topping. He determinedly sucked up every last bit, including the stuff on the table, as Ben looked on all innocently.

Who knows, Max could become the designated Dustbuster of our home. He seemed pretty happy doing the task although granted, sucking up crumbs with a little machine does lose its charms pretty quickly.

Of course, I was thinking it was a good dose of occupational therapy. But mostly I was thinking: WOW WOW WOW, SOMEONE ELSE NOTICED CRUMBS.
Ellen Seidman at 6:38 AM