I can't take him anywhere: the perils of the teen backseat driver 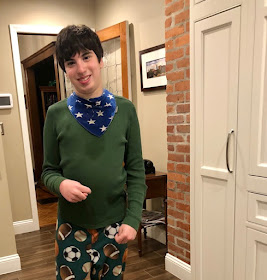 Max has a new favorite sport, and it is called "backseat driving."

"No, no, no!" he says when Waze directs me to a less traffic-y route when I'm driving him to school for a program.

"Wrong way!" he inevitably announces when we are driving somewhere new—as in, a place he has never been to before.

"SLOW. DOWN!" he admonishes me, as I back out of the driveway.

This is all seriously annoying.

"MAX! You are stressing me out and I need to focus on driving!" I said to him, agitatedly, this weekend as we took Sabrina to an event and he kept telling me I was not going the right way. Sabrina rarely takes her eyes off her phone when we're in the car, so this isn't an issue with her. I could likely make it from New York to Florida before she'd look up from Insta and ask where we were.

I turned my phone in its holder so Max could see I was following the path Waze had laid out for me.

Max actually does have a pretty phenomenal sense of direction. No matter what, though, he thinks he knows better than the navigation apps.

Sometimes, as I'm getting worked up, I catch myself and think about how incredible it is that Max is annoying me. Incredible because there were times when he was little I wasn't sure how he would be able to communicate. And boy, is he communicating.

Max is being a know-it-all teen. And I am relishing how typical this is...even as he bugs the heck out of me.
Ellen Seidman at 6:37 AM