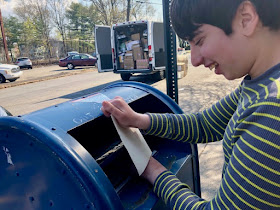 I was doing errands around town with Max on Saturday, and we stopped at the a mailbox to send some letters.  I asked Max if he wanted to do it. He said he did. I helped him out of the car and handed him a few letters; holding all seven at once would have been a challenge. Then I got back in the car and let him do his thing.

The post office has a mail slot, which is easier for him, but there are boxes around town which we use on occasion. Max kept trying to open the mail flap. It was hard; the handle's close to the top, and it wasn't easy for him to get his finger in there and pull down the heavy metal lid. He looked at me. I got out of the car.

Max said yes. So I helped him hold the mail flap open and he put the envelopes in. That's when I noticed a mother and teenage boy standing behind us, waiting.

"Are you sure?" the mom asked.

"Yes!" I said, as Max carefully stepped off the curb and walked to the car to grab the remaining letters.

I stood to the side. The boy tried to put the letter through a seam in the middle of the mailbox.

The boy looked at the lid, his mom motioned to it and he opened it and put the envelope inside.

And that's when it dawned on me.

"It's a good day to be practicing mailing letters!" I said.

"Yes!" the mom said, smiling. Then the two walked off and I stood there, watching them. Of course, I know that Max is hardly the only person in the world who needs practice mailing letters, but it was so heartening to see this other boy doing it, too, with his mom by his side.

I felt like Max had company, and so did I.

I helped Max get the lid open again, and he stuffed the letters in. The next day, I found a few more pieces of mail to send and took him back to the mailbox.

He got the lid open on the second try, on his own, and dropped the letters in. 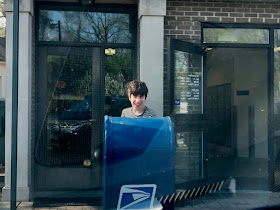