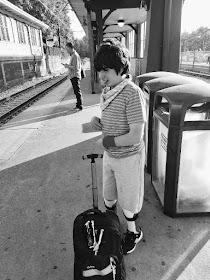 For years, we have lived through Max's various phases and obsessions. Endured, some might say. Recently, they've taken a turn for the better. Less annoying, some might say.

The purple phase, which started seven years ago, was welcome at first—I was thrilled Max was expressing a definitive like. Purple! Everything needed to be purple! But then: EVERYTHING. NEEDED. TO. BE. PURPLE. The clothes he wore, the plates he ate off, his bed sheets, his band aids: purple, purple, purple. People started mailing Max purple presents and emailing photos of purple homes.

His fascination with car washes and spaghetti overlapped the purple phase, hence the reason he wanted to be known as Purple Car Wash Spaghetti Max (trademark pending). During this period, Max ate lots of carbs. Our car was very, very clean, especially since he liked going through the car wash twice in a row. One year, I made him a portable car wash for Halloween.

Next, the movie Cars came out, and Max got really into Lightning McQueen. Then Cars 2 came out, and he needed All The Merchandise.

Three years ago, Max decided he wanted to be a firefighter when he grew up. He began calling himself Fireman Max. We visited our fire station at least once a week, along with others. We amassed all sorts of toy fire trucks. In March 2016, Max did a fire safety presentation for his bar mitzvah's good deed project, and both of us were so proud.

Now, he had career aspirations. And the interests kept maturing: Max got into traveling places, starting with a Chicago trip he planned; he wrote guest posts about it before and after. These days, the wanderlust continues. He's got his sites set on Las Vegas, the next boys' trip he's going on with Dave (and, this time around, Grandpa Michael). Max tells everyone he knows or meets that they're headed to Las Vegas, and repeatedly talks about his schedule—leaving for the airport at 6:45 a.m., birthday dinner at 6:30 p.m. at Benihana's, a Dairy Queen ice-cream cake, visiting a fire station, yada yada.

When Max was an infant, the pediatric neurologist told us to expose him to as much as possible to help expand his mind. At first it was next to impossible, because he had sensory issues that made him fear crowds and noise. But now, all he wants to do is explore the world. Throughout the week he keeps asking what we're doing on the weekend to make sure he's fully booked.

Recently, Max got it into his head that he'd like to take the train to school instead of the bus. Last Friday morning, Dave and he headed off to the station. As luck would have it, there had been an accident and the trains weren't running. Max took it completely in stride. They'll be going tomorrow morning instead, just a dad and his son headed to school, anywhere and everywhere.
Ellen Seidman at 6:37 AM