Letting our children learn from their mistakes: not always easy, but worth it 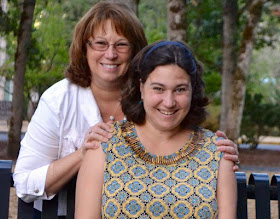 This excerpt is from the new memoir Loving Lindsey: Raising a Daughter with Special Needs by Linda Atwell. For years I've read about Lindsey, now 37, on Linda's blog. Lindsey has a tremendous spirit, a strong well, and intellectual disability, and her mom writes lovingly about her while telling it like it is. The book is the same, a beautiful coming-of-age story.

When Linda first mentioned the book to Lindsey, Linda recounts,"she asked me if I was going to tell the good, the bad and the ugly. I told her that, yes, I would do just that. She said, 'Well, I am pretty funny. As long as you tell the truth, it's OK by me!'" Linda did not disappoint. 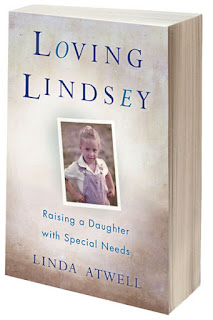 "It’s a cashless system on the ship," I explained to my kids, during lunch on the Lido Deck. I showed them the cruise-ship charge cards they would use over the week. "Whenever you want something, like a soda or a souvenir, you give them this card." I handed one to Lindsey, and her eyes grew wide. "At the end of the week, we’ll get a bill."

"I get my very own charge card?" my thirteen-year-old asked, holding the rectangle tightly between two fingers.

"It’s like money," my husband said between bites of pepperoni pizza. "Don’t spend more than you can afford."

"And don’t spend it all at one time," I added. "Budget so your thirty dollars will last the entire week."

Lindsey opened a pocket on her Hello Kitty wallet and slipped the card inside. "Now I’m ready to explore. Do you think I’ll get lost?"

"Nah," her little brother said, acting as if he were captain of the SS Minnow. "You can’t get lost."

That wasn’t totally true. John and I had become disoriented on past cruises, believing we were aft when we were actually forward, but being confined to the boundaries of a floating resort helped. "Stick together," we told the kids.

"But she’ll cramp my style!" Michael waved his hands in the air, rejecting our suggestion. What style? He was only ten.

"Whatever, Michael," John said, wiping his mouth with a napkin. "You need to keep an eye on Lindsey." Michael shrugged and rolled his eyes.

"I don’t wanna do what Michael’s doing," said Lindsey, picking fry salt off her fingers. For all of her challenges, she possessed a keen sense of direction. "I don’t wanna be rushed. I wanna explore on my own."

"Okay, then," I said, though I worried this might not be such a good idea. "As soon as we finish eating, we’re going to the Sun Deck for the sail-away party. When you’re done, come find us. If you get lost, ask a crew member for help."

"To a week of fun in the sun!" I clinked my glass against John’s, then sipped my slushy margarita.

"I have some for Michael, too," Lindsey said, appearing out of nowhere and handing me a silver-and-gold key chain and a blue-and-gold pen, both imprinted with the Princess Cruise Line logo, as well as a bag of chocolate candies. "They were free." She distributed identical trinkets to John.

"Where did you get these, Linds?" I asked. I knew they weren’t free.

"In the gift shop. They wouldn’t take my money. The lady gave them to me." Her huge smile exposed the small gap between her two upper front teeth. I mentally calculated the value of the items and realized she had spent most of her thirty dollars in one shopping spree, and we’d just set sail. I turned the souvenirs over in my hand.

"Lindsey, don’t you remember? We talked about how the ship doesn’t take cash...." I started to say.

"Yes, but these were free."

"Did they ask for your card?"

"Yeah, but the lady said I don’t need to worry ’bout paying."

"That doesn’t mean they’re free," I noted. "She meant you didn’t need to pay right now."

I explained and reexplained the cashless system, like I’d explained and reexplained millions of other things her mind didn’t digest on the first or second or third attempt. It wasn’t her fault the short in her brain messed her up, but boy, it sure could be aggravating. For both of us. Lindsey crossed her arms and stared at me as if I were speaking French instead of English. "Is this really how you want to spend your money?"

"All the stuff was free." Lindsey’s arms and head tremored. She clenched her jaw. We were at an impasse. "Don’t you like your presents?" she asked, her voice tinged with hurt.

"It’s not that," I said, her sadness tugging on my heart. "You can keep all these treasures"—I paused—"if you want. But let’s go back to the room and add everything up." Lindsey scowled.

She followed me down the steps, and through the long corridor to stateroom 2112. I pulled a calculator from my purse and added all the prices. "You spent twenty-six dollars and thirty-five cents. If you keep all this stuff, you’ll have less than four dollars for the rest of the week. Is that what you want?"

"Did the salesperson take your card?" I asked again. Lindsey nodded, fury evident on her face. "If she scanned your card, you’ll pay when the bill comes."

"You don’t know what you’re talkin’ ’bout, Mom!" Lindsey’s hands flew around in the air. She was verging on a meltdown, and I didn’t want to start our vacation that way.

"Stop!" I held out my hand like a school crossing guard. Lindsey froze in place, like a child playing freeze tag. It was as if she had an invisible barrier around her. "Listen!" I wished I’d thought to use this counselor-suggested technique earlier. Before I’d finished the final command, my girl started counting. Loudly. Once she reached ten, I offered a new solution.

"Let’s go to the front desk and talk to the purser," I said, hoping she’d be more receptive if a neutral party confirmed the news. Lindsey shoved the gifts into a plastic bag and followed me out of the room, along the corridor, and up the stairs.

"Twenty-six dollars and thirty-five cents," Alex at the purser’s desk said. He handed my daughter a printout.

"I have to pay this?" Lindsey turned away from me and leaned closer to the purser.

"Can I?" Lindsey asked, the anger snuffed from her voice.

Lindsey retraced her steps and arrived at the gift shop doors without any detours. Guess she won’t have trouble finding her way around, I thought, seeing a young woman standing at the cash register, smiling.

"I tried to explain the process to your daughter," Greta said.

"I know." I nodded and inquired whether everything could be returned.

"Of course." Greta took Lindsey’s card and scanned a credit. Lindsey thanked her; I thanked her. Several times. We climbed the stairs toward the Sun Deck.

"It’s nice you wanted to bring us gifts." I wrapped one arm around my girl’s shoulders and squeezed. "You’re a very considerate young lady."

"I thought they were free."

"We all make mistakes. Now, let’s go have some fun." 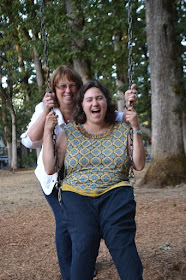 Excerpted with permission from  Loving Lindsey: Raising a Daughter with Special Needs by Linda Atwell. Photos by Kristine Thomas.
Ellen Seidman at 6:40 AM