"It's disgusting!" he said: Everyone's got an opinion 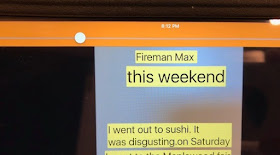 None of my children hesitate to make their opinions known, they just have various ways of doing it. Ben likes to shriek in excitement or disappointment (both at the same extreme decibel levels). Sabrina tends to cock her head to one side, look you in the eye and speak her mind. Max, he likes to repeat himself again and again and again.

It happened Saturday night, when we went out for sushi. We visited a restaurant we've been to before that Max has always liked. He ordered his usual: miso soup and two avocado rolls, no seaweed (that's hard for him to chew). "Sixteen pieces!" he informed the server, verifying that each roll came with eight.

At some point into the meal, though, Max decided he wasn't into it.

"It's disgusting!" he announced.

I almost spit out my spicy tuna roll, because I started laughing. I couldn't help it.

"This!" he said, pointing to his mishmash of soup and sushi.

I'd never even heard him say that word before.

Max wasn't noting this very quietly, either, and the tables were close together. For once, I was grateful that his words aren't always intelligible, because he kept saying "It's disgusting!" every few minutes. He had a grin on his face the whole time.

The sushi at this place is actually really good, so I didn't get why Max had taken a dislike to it.

"Please, don't say that in front of our server, it's not nice," I cautioned him, and he refrained. But the second she was out of earshot: "It's disgusting!"

Dave and Sabrina were too busy stuffing their faces to notice. Meanwhile, Ben was putting his hands into his bowl of ramen noodles then running noodles through his hair. Disgusting!

I picked up a piece of salmon sushi and popped it into my mouth as Ben combed more noodles through his hair and Max chanted "It's disgusting! It's disgusting!" We've come a long way from those days when Max had issues with noise and crowds and going out to restaurants was like an episode of Survivor. Max is alarmed now only by eating weekend dinners at home (he looooves to go out)—and sushi he is over.

Max does have a tendency to perseverate. It's comforting to him. But I think part of what happened Saturday night was Max's pride in asserting his opinion. That meal was not up to his standards, and he wanted to make quite sure we all knew it.

He didn't stop till we left the restaurant, then let it go. But when it came time to write his weekend recap for Monday homeroom, there it was, right at the top of his list:

"I went out to sushi. It was disgusting. On Saturday."
Ellen Seidman at 6:38 AM