My son called me mean and other exciting milestones 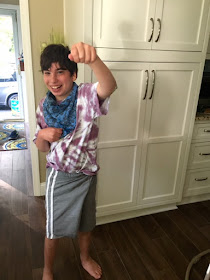 "You're a mean mom!" Max informed me as his bottom lip jutted out.

He'd never said that to me before.

I was very psyched.

Until now, there's only been one other kid in this house who has declared me mean. Not just ordinary mean—oh, no, I am the meanest mom ever, according to Sabrina. She has told me this several times, but I've never paid much attention because as we all know, if just one person says it, it's not necessarily true.

Ah, but now, Max had mentioned it. The reason he dubbed me mean: I was making him eat dinner. Broccoli quiche, to be exact. He actually likes quiche but claimed he wasn't in the mood to eat dinner. Given that he's supposed to be gaining weight, per the doc, I wasn't letting him off the hook. Bad to the bone, that's me!

It seemed rather awesome that Max was recognizing his feelings, and verbalizing them. How utterly typical is it for a teen to call his mother mean?!

Crawling, taking steps, walking, saying words, picking up objects, eating independently, drinking independently, potty training: These have all been momentous developments in Max's life. Along the way, there have been countless inchstones, along with achievements that might be dubious by most people's standards...unless you have a child with special needs.

Among Max's questionable behaviors that have, over the years, made me giddy about his cognitive and physical progress: Lying (it was a bathroom thing); teasing his sister; loudly blowing his nose (at least he figured out how); telling me he'd do his homework "tomorrow" (procrastination: also typical!); figuring out how to unlock the front door and make me think he'd gone missing when he was just sitting on the porch; jokingly saying "thank you!" instead of "excuse me!" when he burps and photobombing.

"It's bad but good," is how Dave refers to this sort of stuff.

I kept teasing Max about being a mean Mommy. By the end of the evening, because he is such a sweetheart, he'd told me he was just joking and I was the best mom ever.

I know he was just saying it to be nice. Really, he thought I was a mean mom. Wheeeeeeeeeee!