A new study pits one disability against another: not cool 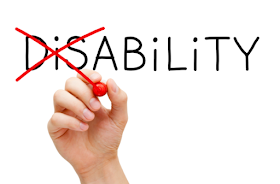 More than half of adults recently surveyed would rather lose a limb, their hearing or their speech than lose their vision. What?! I heard this as I was driving in the car the other day and a news station reported on the results of a poll of 2044 Americans conducted by Johns Hopkins University School of Medicine and published in the journal JAMA Ophthalmology.

As the parent of a child with disability, I found it offensive and unfortunate, even as I understood what the study was getting at.

The respondents feared that their quality of life would be affected by a loss of sight, and that they would suffer a loss of independence. Some already had a taste of that and perhaps feared the future, as 63% of respondents reported wearing glasses.

Now, Johns Hopkins is a top-notch school that has made countless valuable contributions to the field of healthcare and medicine. I am certain they meant no ill; they seemed to have been aiming to establish the priority of vision health among people, and the need for support for ongoing research for vision and eye health.

"Using fear to help prevent one health issue hurts the overall special needs community—the last thing anyone wants is a division!" says Jen Lee Reeves, a mom of two, advocate for the limb different and founder of Born Just Right. "Not long ago, there was a trend on Instagram in which kids would ask followers to vote for the person who was the 'prettiest.' This left the kids who were not voted as the prettiest feeling sad and rejected. That wasn't the intent by the person who started the contest, but it left behind hurt. No one wins. This study reminds me of that digital beauty contest."

I seriously hope not to see other studies like this in the future. Can you imagine? "Researchers asked which disability is worse to have: 1) autism 2) Down syndrome or 3) cerebral palsy." It seems ridiculous, but it's not that far off from the question Johns Hopkins researchers asked.
I know that disabilities can be intimidating and scary if you don't know someone who has one. Before I became a parent, I felt only sorrow for children with special needs. Then I had a child with special needs, and realized that their lives can be just as happy, full and rich as anyone's. They were no tragedies. They were children.

The truth is, there is no hierarchy of disabilities. One is not "worse" than the other. Each disability has its own spectrum of challenges—and abilities.

And every type of disability has a spectrum of very awesome people.
Ellen Seidman at 6:37 AM