Highs and whoas of a trip to the Central Park Zoo 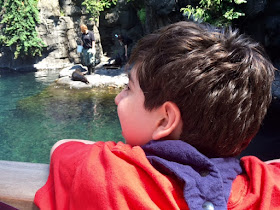 • As we waited on a train platform yesterday morning, amidst commuters headed to work, Max ended up standing super-close to some guy (personal space: still in progress). "Hey, Max, want to make new friends?" I asked. "No thank you!" said he. 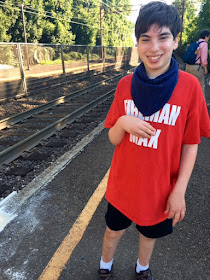 • As we settled into our seats on the train, Max exclaimed "Thank you, Mommy, for taking me to New York!" How did I get such a polite child?!

• I did the smart thing: I purchased zoo tickets online ahead of time, on the train. Too bad we needed to print them out. (Hello, environment?) We stopped by the Wyndham New Yorker hotel to see if we could print them there. One staffer said no. The next staffer I asked said yes. (Moral of the story: Don't have a third child because then you won't have time to purchase tickets online at home.)

• As we walked through a gigantic crosswalk, Max fell down. (He sometimes trips over his feet.) After a guy helped him up, he pointed at me and said "YOU PUSHED ME!" So much for my polite child.

• Max loved the zoo's movie Ice Age: No Time for Nuts. A mere nine minutes long, it's a 4D experience complete with snow, a couple sprinklings of water, whirls of cool wind, movement and lights. 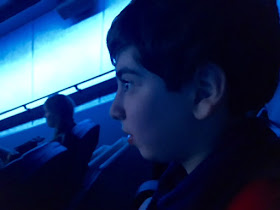 • I had to sit through it again, mainly because Max liked the snow.

• Then Max queried the ushers on exactly where the water and snow came from in the theater. Smart boy.

• Max decided that the bronze animals (a bear, hippo, goat, elephant, kangaroo and penguin) that rotate on the stroke of every hour and half hour at the zoo's Delacorte Clock were just like the ones in the movie Madagascar. I explained that they were old, but he wasn't having it. 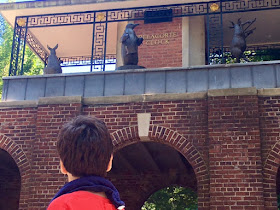 • Got to the sea lion feeding early enough to get a seat! But then, one minute before the show started, Max spied a girl eating ice-cream and wanted to leave to get some. He wouldn't listen to reason, so in desperation, I told him I had to look up where to get ice-cream, and proceeded to stare intently at my phone until the show started.

• Max was mesmerized, especially when the sea lions danced.

• He laughed when I said the sea lions were eating sushi. Or maybe he was just humoring me, I can't be sure.

• At the penguin exhibit (my fave), Max informed me that the Central Park Zoo had gotten the idea of frolicking penguins from the movie Madagascar. As proof, he insisted that we find clips from the movie and watch them.

• For the record, the penguin exhibit smells better than some New York City streets during the summer.

• As we observed puffins, I told Max that years ago Dave and I had gone on a trip to Alaska and saw an island full of puffins, and that I used to call Dave a puffin. He could have cared less. 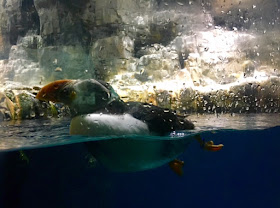 • A lot of the animals in outdoor exhibits were nowhere to be seen, either because of the heat or because they'd finally gotten tickets to see Hamilton. Meanwhile, Fireman Max was utterly enchanted by another sighting at the zoo: Five firefighters (species: FDNY) sitting on a bench. They were there to inspect something, and taking a break. "What's with the shirt?" one of them asked. "He wants to be a fireman when he grows up," I explained, dutifully. (One of these years, I'm going to demand payment for being Max's spokesperson.) High-fives were exchanged all around.

• Five minutes into our stay at the Children's Zoo, where you can feed the animals, Max decided that he needed to be fed. Once he discovered the café had no mac 'n cheese, he was done with the zoo.

• Mac 'n cheese for him, ahi tuna tacos for me at Todd English in the fancy food court beneath The Plaza Hotel.

• Max wanted to ride a NYC bus. It's been a while since I've been on one and I'd forgotten: You can't use money, only a MetroCard that needs to be purchased at a train station or rare street vending machine. The bus driver let us stay on anyway.

• Said driver cursed at traffic and pedestrians continuously for the entire 20-block ride.