Do you, they say—but is that always OK? 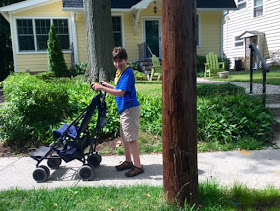 Max has long been fond of anything on wheels—cars, trucks, trains. Also: This stroller he's had since he was three. It's an adaptive Maclaren one given to us by a former physical therapist. When Max was younger, it came in handy for wheeling him around. These days, Max occasionally sits in it if he and Dave have walked far and he gets tired, but it mostly comes in handy for entertaining him.

Max loves to wheel that thing around—up and down the block and sometimes, through our neighborhood. Which is exactly what he was doing yesterday afternoon as Ben cruised along in his stroller, beside him. While he does like to wheel Ben, he also likes wheeling his empty stroller around.

I have no issues with this, and Max could also care less what anyone thinks. It's harmless fun for him. That said, it's not really doing much for his image.

Max isn't good friends with any of the kids in our neighborhood. They're friendly towards him, and that's as far is it goes. The other week, some boys were kicking around a soccer ball and they welcomed Max, which was utterly amazing. As in, it really shouldn't be a big deal to do that but given that this doesn't typically happen, it was a big deal.

And so, the stroller. That he likes to wheel. Empty. I wonder if it is further widening the chasm that exists between him and other kids. The red Fireman Max hat sure hasn't helped, but he no longer wears that day in and day out, just on special occasions (at camp last week, he wore it constantly).

OF COURSE I want kids—and everyone—to accept Max for who he is, quirks and all. I wish they could see all that Max is, not just his disability. The stroller makes it that much harder.

I could suggest that Max quit wheeling it around or, at the very least, limit its usage. Maybe I could come up with an alternative for him to push around. He does like shopping carts. But that wouldn't do much for his image, either.

And this is where I get stuck. He's older and you have to help him not seem too childish, says one part of me. The other: Why mess with an activity he enjoys?
Ellen Seidman at 6:35 AM