Heads up, Hollywood, this isn't funny 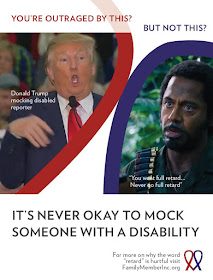 You might be familiar with Tropic Thunder, the 2008 comedy starring Ben Stiller, Jack Black and Robert Downey Jr; Stiller co-wrote the screenplay, too. It follows a group of actors making a movie about the Vietnam War. In it, the character Kirk (played by Downey Jr.) gives Chuck (Stiller) advice about a film he was in, Simple Jack, which centers around a character with intellectual disability (ID). Chuck usually plays action heroes, but decided to stretch his range and portray a man with ID in hopes it would be award-winning material. The movie was a flop; as Kirk explains it, he overdid the acting.

The scene sparked, you guessed it, the catchphrase "Never go full retard" and a meme that won't die. There are any number of t-shirts you can get emblazoned with the phrase. 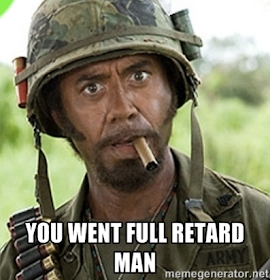 Hollywood, comedians and a whole lot of people on Twitter thinks the word "retard" is funny. It crops up in movies on occasion—Ted, The Change-Up, The Descendants, Napoleon Dynamite. The people cringing in the movie theater, the people who speak out, include those who have loved ones with ID, disability advocates and the Special Olympics, which started the Spread the Word to End The Word campaign.

Stiller's never apologized. He defended the Tropic Thunder scene by saying that disability groups that called for a boycott of the film missed the point. "It's sort of edgy territory, but we felt that as long as the focus was on the actors who were trying to do something to be taken seriously that's gone too far or wrong, that was where the humor would come from," he told MTV News.


In related news, last fall Donald Trump came under fire for seemingly mocking a reporter with a disability. At a rally in South Carolina, he looked to be mimicking New York Times reporter Serge Kovaleski, who has a condition that affects his joint movements.


The incident made headlines and appalled many. Trump appeared to be stooping to a new low in making fun of someone with a physical disability—going, as ABC News put it, "where no presidential candidate has gone before." Trump later denied it, claiming he had never met the reporter, which Kovaleski has disputed. At a subsequent rally Trump noted that he was merely being "very expressive" when he was talking.

The reaction to Trump left an impression on Hannah Jacobs, the mother of a young woman with intellectual disability, an advocate and president and founder of the nonprofit Family Member (I'm on their advisory board). "It struck me as hypocritical that people became so incensed by Trump mocking the reporter, yet never spoke out when people with disabilities were mocked and marginalized in films or comedy routines," she says.

People are often quick to note they would never call someone with intellectual disability a "retard"  but see nothing wrong when the word is used in as a synonym for stupid, pathetic and loser—perpetuating the idea that those with ID are stupid, pathetic losers. It's a distinction that is lost on a whole lot of people, including Hollywood powers-that-be.

And so when Family Member landed a grant, Hannah made an ad. As of today, it's going to be running in the Hollywood Reporter for five weeks. Hannah seeks to engage screenwriters, actors, comedians and members of the entertainment community. Hopefully, it will help them better understand that mocking disability in any form is no joke.

There are infinite ways to be funny on film, as Ben Stiller has shown us throughout his career—but there's no reason to do it at the expense of people with intellectual disability.

Do you get why this word hurts so much?
Ellen Seidman at 6:38 AM