Why I love this dirty bowl 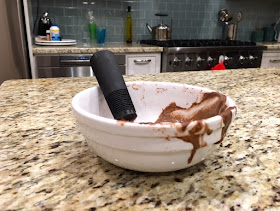 I love this dirty bowl.

Because Max put it on the counter with his own two hands.

Because last night at around 7:00, Ben was hungry and Max was tired but before he could go to sleep, he needed his anti-seizure medicine. So as I held Ben I spooned some chocolate yogurt into a bowl, put a square of Dycem on the table (tacky stuff that helps keep bowls from moving around as Max eats), placed the bowl on it, opened the packet of compounded medicine and sprinkled it in, settled Max into his chair, put a bib on him to catch dribbles then went off to the living room with Ben to give him a bottle.

"I'm done!" Max announced from the kitchen a few minutes later. That was good, since sometimes he has trouble spooning up the last of the yogurt on his own.

"Honey, I can't help you right now so just hang on a few minutes," I said.

Usually, I would remove the bib, clean Max's face and bring the bowl to the sink. He otherwise uses plastic or melamine bowls—including adaptive ones with deep concave sides that enable him to better spoon up food— but I find that the yogurt melts faster in them and gets harder to spoon up, so we use a porcelain bowl for it.

A couple of minutes later, I heard water running in the kitchen. Hmmm, I thought. Wonder what he's up to.

Then Max walked in, and his face was mostly clean except for some yogurt on his chin, which I pointed out to him. Max walked into the bathroom and again, I heard the water run. When he came back, his face was fully clean.

Maybe I need to leave him to his own devices more often, I thought.

I figured Ben would have a good influence on Max (and vice versa). But I hadn't realized that because I'd sometimes have to focus my attention on Ben instead of Max, it could and would force Max to be more independent.

I also realized that I needed to get off Max auto-pilot. I am too used to doing things for him, and need to step back where I can. Max has made some advances in fine-motor skills in recent months. Last year around this time, I was unnerved one night when he couldn't open the knob of his bedroom door. And now, he can. He continues to open the back door for me and Dave when we get home.

Then I walked into the kitchen, and found the bowl sitting on our counter, with the bib and piece of Dycem in the sink. Picking up a porcelain bowl with two hands is a big deal for Max and he figured he might not be able to safely transfer it into the sink, so he wisely left it on the counter.

And that's why I love that dirty bowl.