Max knows what he doesn't know, and that's good 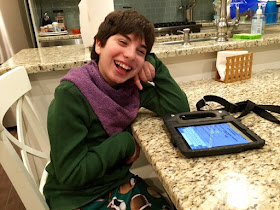 Max and I are staring at his iPad. He's supposed to use this week's vocabulary word, "whimsical," in a sentence and I'm waiting for him to do it. Only he's not.

Max says something and at first, I don't understand him. Then he repeats himself and I realize he's saying, "I don't know."

It is the first time I have ever heard him say those words, and I'm thrilled; it's a cognitive and behavioral breakthrough.

For a long time, when Max didn't get something he'd either stare blankly or get frustrated and whine. In recent years I've seen him fake understanding. Like we'll read an article for current events together and I'll ask if he gets it and he says "Yeah!" and nods vigorously, only when it comes time to answer questions, it's clear he didn't fully comprehend it. Max doesn't get tests at school, so it's sometimes hard to gauge what he is and isn't absorbing. It never occurred to me to teach him to say, "I don't know."

Perhaps he doesn't disclose that he's not understanding because he aims to please. Maybe he's embarrassed. Or maybe he doesn't want to deal with additional explanations. The other evening, though, Max did acknowledge that he didn't know something. It takes a certain level of maturity and confidence to admit that (unlike a sister who shall remain nameless who makes like she knows everything). Ultimately, it will enrich his world, because if Dave, me and his teachers are aware that he isn't understanding we can keep at it until he does.

This is also a baby step toward self advocacy. Next up, I'd love for him to be able to say, "I need help with this" or "Can you explain that again?" We'll work on that.

We talked a little more about the word and came up with, "I am going to have whimsical balloons at my bar mitzvah." And he flashed me a smile because he nailed it, and he knew it.
Ellen Seidman at 6:35 AM