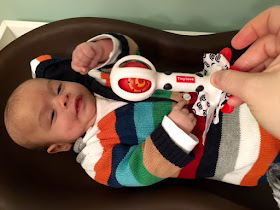 I'm holding a rattle over Ben's changing table, shaking it and carefully watching his reactions. He tracks it with his eyes as I move it from side to side. He swats at it. Good. But he's not yet able to grasp it.

I do my best not to pounce on the two occupational therapists who come to the house separately every week for Max.  I've done my part Googling what Ben should be doing at three months old, but I want to hear their opinion because they can gauge Ben with their own eyes. His next visit with the pediatrician isn't for another four weeks, which is way too long to wait.

I try to be as nonchalant as I can.

"At what age do babies grasp with intent?" I ask during each of their visits, because I know there's a fine-motor skill difference between babies purposefully grasping a toy and reflexively doing so because you've wedged the rattle into their little palm, as the therapist used to do with little Max.

Both tell me that at around four months, babies usually start grasping larger objects, like blocks.

I place a rattle in front of Ben and show how Ben swats at it.

"Looks good!" one says, smiles at Ben and then goes off to do Max's therapy session.

"When babies start bringing their hands mid-line, they're better able to grasp," another tells me on the afternoon she comes to see Max.

"OK! The ATNR should be disappearing soon," I say, adding ruefully, "I know too much."

Really, what I want is for them to grab me by the shoulders and say, "THIS BABY IS FINE! HE'S DOING EVERYTHING HE'S SUPPOSED TO!" Because I need that assurance. Despite my best intentions, I am watching Ben like a hawk to make sure he's doing things on time, and worrying about him.

I did this with Sabrina, too, but don't remember feeling as anxious. I suspect that's because Max was two when she was born, and I was consumed with his development; I didn't have enough worry to go around. But now that Max is in such a better place, I can focus my concerns on the new little guy. They aren't ever-present, just little flare-ups here and there.

It bothers me that I worry.

I should know better.

Ben is not that baby.

Obsessing about what Max was and wasn't doing drained a lot of joy out of the first years with him. He was a smiley, pudgealicious tot; I was a person who had loved babies since she was old enough to pick them up. But the ever-present anxiety meant I could not fully enjoy him. Instead of relishing the child in front of my eyes, I'd freak out about the child he could be. When would he hold a bottle? Grasp a toy? Sit up on his own? Crawl? Toddle? Walk? Talk?

The memories of Max's therapy sessions are with me. How the Early Intervention OT would stroke the tips of his fingers on his fisted hands to try to get them to open, then wedge in a little oblong block for him to hold. How she'd hold her hand over his, trying to get him to clutch a peg. Max had to be taught how to grasp objects. Some of the other fine-motor skills babies develop, such as transferring objects from hand to hand and using a pincer grasp for small items like Cheerios, happened when Max was around 9.

Dave has his own baggage from Max's babyhood; he gets overly concerned about Ben's well being. I joke about it but realize that when he says things like "Honey, I was putting him on my shoulder and bumped his nose, do you think he's OK?" he is scared he'll damage the baby. I don't share my rattle worries with him because I don't want to give him any more cause for concern. I don't even want to voice them, because then they'd be real.

And so I stand at Ben's changing table and shake the rattle at him, savoring his sweet smile, exquisite dimple and the cute sounds he makes, and wait and wait for him to grasp it.
Ellen Seidman at 6:36 AM