An Apple store staffer helps a kid with special needs: Nice, but.... 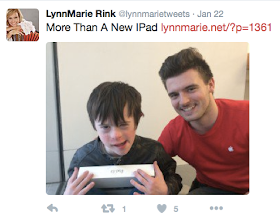 Last week, Nashville mom LynnMarie Rink took her 9-year-old, James, to an Apple store. James has Down syndrome and autism; he uses an iPad as a learning tool, and they were picking up a new one. At some point, James tried to dash out of the store into the mall but instead crashed into a glass wall and fell to the floor. An Apple staffer came over and asked if there was anything he could do. At LynnMarie's request, he got the iPad, sat down next to James and set it up.

LynnMarie posted a thank you note to Apple on her Facebook page, ending it with #BeKindToOneAnother. Elsewhere on her page, she noted how lucky they were for the kindness.

A friend's sister shared the post, which has gone viral. "It got me in the feels," Sheryl said. Me, too. As the mom of a kid with special needs, I appreciate stories like this. But it also gave me a case of the what-ifs. I'll break it down:

What if our children were regularly on the receiving end of such understanding? Then parents wouldn't feel the need to effusively thank people, and stories like this wouldn't make headlines because it would be a normal part of life. Sadly, it isn't. Often people in restaurants, movies and other public places aren't tolerant of our children, especially when they make noise, flap their arms, fuss or have a sensory meltdown. People glare, mutter, make comments and ask management to move them away.

What if people didn't feel badly for kids with special needs? Because that's surely another reason for the popularity of the story, as is clear from comments. It's sooooo heartwarming when someone is nice to those poor children, goes the mindset. I mean, consider this: If Andrew, the Apple store guy, had done this for a child who didn't have special needs and his mom wrote about it, would that story have attracted much attention? Would people be trying to get Andrew on The Ellen Show? Would tears be coming to people's eyes? Would they be sending prayers the family's way? Exactly. I'll bet Andrew would have handled any child this way. I wish the masses would quit considering it an act of sainthood when people with disability are treated normally. This story is an example of excellent customer service, not above-and-beyond humanity.

What if it were no big deal for people to meet those with disability "where they are at," as LynnMarie put it. She meant it both literally and figuratively. Parents of kids with special needs often face resistance when it comes to accommodations in programs, activities and camps—even for birthday parties. It isn't that difficult to level the playing field so that our kids have the same opportunities as others do, but it definitely has to start with an open, willing mind.

None of this is meant to undermine what happened that day in the Apple store; Andrew did a wonderful thing for James.

But then: What if?