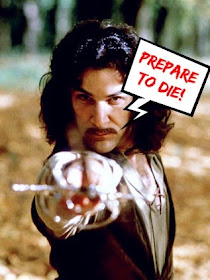 "My name is Inigo Montoya, you used the word 'retard,' prepare to die!'" said no one ever. Still, many parents of kids with intellectual disability have strong reactions when people toss that word around, part of a deep desire to defend our children's honor.

Today is the seventh annual day of awareness for Spread The Word To End The Word, a campaign started by the Special Olympics. Why? The r-word has become a slur. When it's used casually in conversation as a synonym for stupid, loser, pathetic, weird or non-functional ("The new website design is so retarded!"), it perpetuates perceptions that people with intellectual disability (once medically described as "mentally retarded") are stupid/pathetic/losers/weirdos with lesser abilities.

This isn't a matter of freedom of speech, unless you're the type to believe racial epithets are OK. This isn't about being overly sensitive, either, given that the word demeans an entire population of people. Many doctors, hospitals and schools have quit using "mental retardation" as a diagnosis since it has become pejorative. Heck, the Supreme Court ditched the term last year.

Of course, this isn't just about a word; significantly reducing its usage won't automatically transform people's attitudes toward people with disability. But asking people to reconsider the word and what it signifies is a way to spark conversation about how we view people with intellectual disability, and rack up more respect for them along the way.

So there's that. And then there's reality of how to deal when someone you know drops an r-bomb, a habit that dies hard; a lot of us grew up using that word. You don't want to seem preachy. Nobody wants to come off as Mr. or Ms. Word Warrior.

I've found that it helps to first acknowledge the person didn't intend to be offensive (as is usually the case), and then give an explanation if someone doesn't understand why the word is so hurtful. Once, I was walking home from the train station with a neighbor who mentioned how "retarded" something was. I said, "I totally know you didn't mean anything by it, but I find that word offensive," and she immediately got it and apologized and we moved on.

Sometimes, it's not possible to say something on the spot. I was out for lunch with a group of friends the other week, and as we chatted away one of them said, "That's retarded." I wasn't going to interrupt our gossipfest plus I thought she might be embarrassed if I said something, no matter how nicely. So that night, I emailed:


Hi. So, I wanted to share something with you, I hope you don't mind. I think you won't because you are one of the more caring and wonderful people of this world. At lunch, you used the phrase "That's retarded." I didn't bring it up then because we were all talking a mile a minute, but it's a word that's become offensive to parents of kids with special needs, because of its associations.... I KNOW of course you didn't mean anything by it! I used to use it too.

She wrote back, "It's a word that I usually never use for good reason, and it flew out of my mouth.... I am so glad you said something." Usually, people get it, though some—including smart and otherwise open-minded people I know—staunchly defend it as a vital descriptive phrase, even as they note they'd never call a person with cognitive impairment "retarded." For them, there's karma.

I'm similarly straight up if a stranger says the word. At work is a whole other thing, though. A few years ago, I was at a new freelance gig and one of the people who'd hired me—again, someone intelligent and cool—regularly said "That's retarded!" It didn't seem appropriate to say anything until I knew her better (and vice versa) but in the end, a coworker who knew I cared spoke up.

Some naysayers insist this is a futile cause; come on, they say, aren't there more important stands to take? The reality is, parents of kids with disabilities are constantly trying—day in and day out—to get our kids the inclusion and equality they deserve. This is just one more thing we do help pave the way for our kids, who travel down the proverbial road of life bearing heavy stereotype baggage.

You never know where a discussion will lead. Yesterday, a writer I adore posted a Facebook update that started with her kid describing a character in a book as "retarded." I noted that I find the word offensive. She said she knew my take and "vehemently disagreed." One of her friends chimed in: "I strongly feel retarded should be reclaimed. I've never used it to describe the developmentally disabled in my life. But some people are just f-ing retarded, and there's no better word. Also, no one's using it anyway, and I hate to see a good word lie fallow."

The woman made a comment about more "tact" and "civility" and having conversations without "bullying." I responded that I was trying to make a point—and that it wasn't exactly tactful to talk about letting a "good word lie fallow" when I'd just said I had an issue with said word. And then, she noted that our kids had a light "so pure and lovely that has nothing to do with the cheap facility of IQ points, and cannot be extinguished." And I couldn't have agreed more.

Please, use another word. My son, kids and adults like him, the people who love them and Inigo Montoya would really appreciate it.

Do you get why this word hurts so much?