The most depressing homework in the history of homework 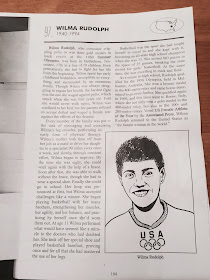 It seemed like a great thing: Max had to read a page about Olympic gold medalist runner Wilma Rudolph and fill out a mini research report. We sat at the kitchen table, where we usually do homework, and I helped him read it, discussing points along the way so he could better understand and retain the information.

The page noted that she lived from 1940 to 1994. I wasn't sure Max understood the concept of death, and I'm still not quite sure why I decided to try to explain it to him in the midst of the Wilma Rudolph report, but I did.

I said, "Max, Wilma Rudolph died in 1994, which means she stopped living."

Max looked at me, curiously. He put one hand to his eye. "Eye?" he asked.

I was confused. Then I realized he meant: Did she cry when she died? He'd seen me crying when my dad died in 2011, and he was making that association.

"No, Max," I said. "When you die, your heart stops beating, you don't breathe and you aren't alive anymore. So you can't cry."

"People often die when they are very old, or if they get sick," I said.

"Ick!" he said, pointing to me and making a coughing sound. I've had a pesky cough for three months now.

Sabrina walked into the kitchen. "It's like you go to sleep and you don't wake up," she said.

Then her face crumbled and she started to cry.

I grabbed her and said that Dave and I would be around for a very long time to take care of her. Then Max's bottom lip started trembling and I hugged him with my other arm.

Eventually we all calmed down, and I helped Max finish his report.

File under: Good intentions gone awry.
Ellen Seidman at 6:40 AM