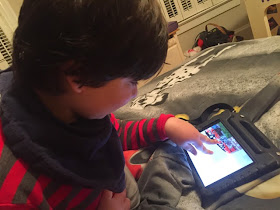 Perfection is overrated: That's one thing you learn as a special needs parent. More recently, I have learned that it can also make you want to run screaming down the hallways of your home.

This is because Max has developed A Thing for getting the fire truck photo that's his iPad's wallpaper positioned just so. (It's a pic of his favorite truck, Ladder 31.) I am not quite sure how or why the photo changes during the day but every single night, before we read books at bedtime, Max will happily sit and arrange and rearrange the image again and again and again (and: again). After about 10 minutes or so, I will literally have to tear the iPad out of his hands.

"No!" Max will respond, and then he'll weasel another few minutes out of me to get the image the way he wants it.

I can think of approximately a bazillion better activities, but this seems to comfort him so I let it go. I once read that it's good to let toddlers choose their clothing because they have little control over their environment and it empowers them. Perhaps this is true of Max: There are bodily movements he can't control, but since this is one he can it makes him feel good. At least this is what I'm tell myself when I just can't bear to watch him zooming that photo around on the screen anymore and I have to leave the room.

Max isn't very nitpicky in other parts of his life. I mean, yes, he never leaves the dining room table without pushing in his chair (a lovely habit that the rest of our family could bear to pick up); he regularly re-adjusts his ever-present Fire Chief hat; he occasionally insists things be spelled all in capital letters; and if you call him "Max" he will shake his head and correct you with "Fireman Max!" In general, though, he's a pretty easygoing kid who doesn't sweat the small stuff.

Max used to just drag the photo around the screen and repeatedly center it. But last night, I saw something new: He took two fingers and spread them to made the image larger. This is an iManeuver most of us wouldn't think twice about, but it's not in Max's usual repertoire of finger movement, thankyouverymuch cerebral palsy.

"Hey, how'd you learn to do that?" I asked, astounded.

"I taught him!" shouted Sabrina, from her bedroom.

So I was giddy. Wow. Cool that he can do that. Then I realized that this now means Max will be able to obsess even more about that image.

If only he could take another tip from Sabrina, whose attitude about perfection can be summed up in this snapshot of a corner of her room: 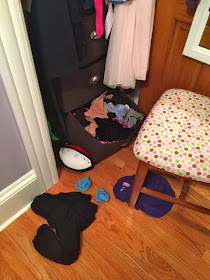