Taking back the hospital 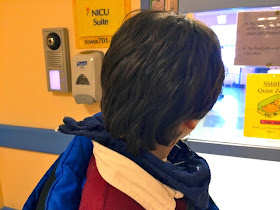 I was so excited to take Max to the cerebral palsy specialist the other week. Yet I was dreading the visit, too. Because the doctor works at the hospital where Max was born, I haven't been back since, and the hospital has loomed large in the parts of my heart and mind where the grief resides.

I can vividly picture the NICU: Max in a glass incubator connected to various wires, the preemie next to him whose heartbeat was visible beneath his translucent skin, the sprawling nurse's station, the lactation room, the conference room where the doctors told us that Max had a bilateral stroke.

I've thought about going back to the hospital by myself to help control the residual grief—if I saw it once again in a clear state of mind, I've reasoned, perhaps it would have less of a stronghold on my emotions. But I never did go and now, I had no choice. I wasn't sure we'd even be able to get to the NICU, yet it was easy enough: After the doctor appointment Max and I took an elevator to the one I found out was upstairs and wandered around the open areas. I spotted a door to the NICU Suite, which looked somewhat familiar. "I think that's it," I said, and a lump rose in my throat.

Max and I hovered outside, peering through the glass. He knew the appointment was at the hospital where he was born, and all week long he'd been saying he wanted to see "his" crib. As we stood there I explained to him that he was in the NICU after he was born because he was sick, but then he got better. There was a baby in an incubator directly in front of us. Max wanted to know where the mommy and daddy were. I said the doctors were taking care of the baby, because he was sick, and the mommy and daddy would be back soon.

Surprisingly, I didn't feel freaked out or sad as we spoke, probably because I was focused on Max and watching him take it all in. I thought, If I could have known back then how he'd turn out, I would have been OK. But of course, you don't know.

I tried to locate the lactation room where I used to pump milk. But the one we found wasn't mine; it had new furniture. The one I'd been in had an old big white fridge and an ancient tan pleather chair that gave me comfort because I was able to sit there and do something that was good for Max, at a time when I otherwise felt powerless.

Then we looked for the conference room. I wasn't sure that was a good idea, but I couldn't help myself. It was the most mundane looking place where our lives were forever changed with one sentence: "Your baby has had a stroke." We went from parents who knew something mysterious had happened to our baby to parents who had an infant with brain damage. The pediatric neurologist sitting across from Dave and me, flanked by two colleagues, somberly telling us that Max might never walk or talk and could have severe cognitive impairment. The pediatric neurologist somberly telling us we could sign a Do Not Resuscitate if we wanted to.

I couldn't find the conference room, either, which is when I started wondering if we were in the wrong NICU. Finally, I asked a nurse where the NICU was with the big open nursing station. I explained that Max had been born there in 2002, and we wanted to see it. She told me this was a new wing, and that the NICU where Max had been was in another part of the hospital...and it had been converted to doctor offices.

The NICU of my nightmares was gone. I could never visit it and get the closure I'd had in mind. But that seemed OK. The NICU had evolved, and so had I.

That mom in the NICU, the utterly despondent one who cried for hours as she stared at her unconscious baby in the incubator, was a long time gone. The doom-and-gloom predictions about Max: They didn't come true. All those dreams for Max's future that I thought I lost when he was born had been replaced by other dreams. And replaced, most of all, by Max. This bright, curious, cheerful, sweetheart of a boy walking through the corridors with me, looking around, asking questions. So full of life and hope and promise and love and oh my heart.

The grief I feel from Max's birth is still there but it will surely continue to dissolve, the pain softened by the passage of time and Max's progress. The NICU suite, the lactation room, the conference room: They will loom a little less larger in my mind, because now I have a new vision of the hospital.

I didn't need to return to the hospital alone to exorcise the demons. I needed to go with Max.

I walked out the lobby doors with Max's hand in mine, and I left that hospital behind. 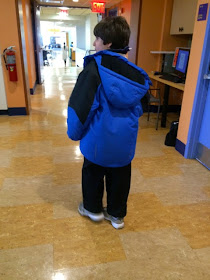