Good ways to get out of homework, but not good enough 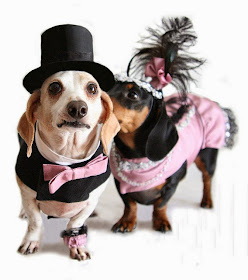 Max does a weekly current events report for his class. He chooses the site (usually DOGONews or Tween Tribune) and the article, then fills out information on his iPad including the main idea, what he thought of it and what he learned. The report is due on Friday and we usually start it Wednesday. Because I work in an office and commute home during weekdays, we don't sit down to do homework until 7.

Max looks forward to this assignment every week. But sometimes, he gets stuck trying to describe the main idea of the piece. Last night, he picked an amusing story about the trend of pet owners marrying their dogs (fur real—with ceremonies, flowers, music and all). Requisite cute photo above because...dogs. Do you think she got her outfit from Rent the Runway?

Max couldn't pinpoint the gist of the story. He wanted me to help him but, no. He sat for 10 minutes, maybe more, finger posed over the iPad, just not sure what to type. I asked some leading questions. Still, he didn't type.

He tried the cute approach, in which he puts one finger to his chin and goes "Hmmm...." He knows it cracks me up every time and sure enough, it did—but I still wouldn't give him the answer.

"Tomorrow!" he said, hopefully. As in, we can finish this up tomorrow. Which was true, but we were nearly done and I thought it was best for him to just do it. Sabrina is fond of the "tomorrow" approach as well, and it doesn't work for her, either.

"Battery!" he said, noting that the battery on the iPad was down to 14 percent.

"There's still enough battery to finish up," I reassured him, and he looked very disappointed.

Then he put his hands to his eyes. Tired, he was saying. I'm sooooo tired.

But I knew what he was really tired of was figuring out the answer.

I would not give in. Finally, five minutes later he typed out "Dogs get married," which was fine.

Sometimes, Max is all too happy too let me enable him. Which is part of my job description—just not when it comes to doing his homework for him. If he doesn't learn to think things through now, if I'm always jumping in to rescue him, then independence will be even more of a struggle as he grows up.

Image: Flickr/geckoam
Ellen Seidman at 6:38 AM