A cool way to describe kids with special needs 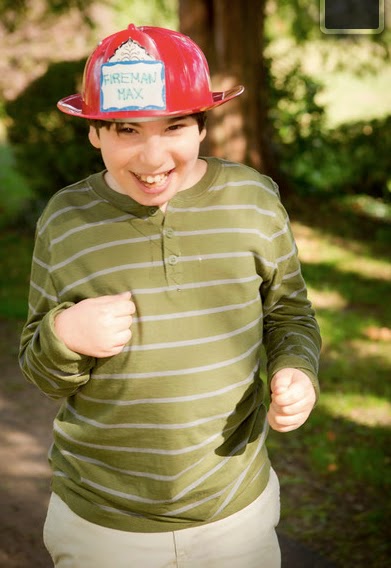 Friday night, we had dinner at the home of a friend of Sabrina's. The family knows Max, but not so well, and they have not yet experienced his firefighter stage.

"Does he wear the hat all the time?" the mom asked.

At some point, Max excused himself from dinner and sat down in the living room to play with a toy truck. Minutes later, he started enthusiastically saying a word to me that none of us could understand.

I ran over with my iPhone so he could type it out.

Ah. I'd brought a chocolate layer cake for dessert, and he wanted some stat.

"He's quite the character!" the dad said, and it was like a stream of light beamed down from the heavens upon me.

It was one of my all-time favorite ways someone has ever described Max.

I am not a big fan of the term "special needs," but I lean on it for lack of a better one. "Disabled" works as it needs to but emphasizes the negative. "Differently-abled" is good, if a bit of a mouthful, and I keep meaning to use it more often.

But "character"? I'll take it! Max is a character, with his quirks and obsessions and his unique way of expressing himself, walking and using his hands. Not everyone always sees it that way, though. Some just see a very different kid, one who has disabilities.

The Oxford dictionary defines "a character" as "an interesting or amusing individual." Webster's says "a person marked by notable or conspicuous traits." And that's Max, for sure. There's no ignoring his personality, especially when he walks around with that red Fire Chief hat on. People find his ebullience for things big (trips) and small (cake) catchy. He's got a million different kinds of laughs, and each one makes you want to laugh right along with him. His new favorite: What Dave describes as his "evil laugh," which sounds like "He. He. He." And he uses it to good effect, like when he's turned off HGTV even though I was watching it because HGTV does not feature fire trucks.

I loved that this man considered Max's way of communicating not a deficit but, rather, a sign of a character. He paid him a compliment. When I told him about Max's speech app, he said "I'd love to see it," and he meant it, yet more proof of his great perspective.

Obviously, I will not be able to write "He's a character" in the "diagnosis" part of Max's insurance forms. But I think it's a nice description for Max to have in his repertoire. He knows he has cerebral palsy. He IDs as being a "nice smart guy," words he used to describe himself for a recent school assignment. He can be a character, too, if he so desires. Not that I'm suggesting this for adults with disabilities—but I like it for kids.

This word could definitely come in handy when people play the "Guess the diagnosis" game. Strangers typically ask, "Does he have autism?" Next time I can say, "No, he's a character."