When pride for your kids beams right out of you 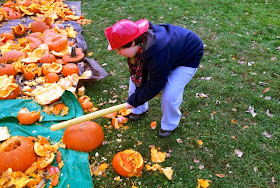 Max is pretty good at destroying pumpkins. This we discovered when our town held a pumpkin-smashing charity fundraiser in a park and Max jumped right in when we arrived, like he did it for a living or something. It was an admirable feat of strength, focus and kick-butt-ness. 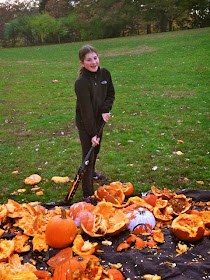 Sabrina did a fantastic job as well, so I guess it runs in their genes. As I watched the kids, I felt a burst of pride. My big, beautiful, strong, determined kids, happily clobbering pumpkins into smithereens. Yeah.

I am sure I had that same gloppy look on my face that my mom used to get when she watched me and my sister doing stuff. It's called "kvelling" in Yiddish, to feel extraordinarily proud.

But now, as a parent, I know: Few things in this world are as purely blissful as those surges of pride you feel for your kids.

Sabrina loves it when I swoon over her. Actually, she solicits it. "Mommy! Watch me do a cartwheel with a round off!/Mommy, aren't you excited I got all the answers right on the test?/Mommy! I made an iPhone case out of rubber bands! HOW COOL IS IT!!!/Mommy, don't I look adorbs with this choker?" 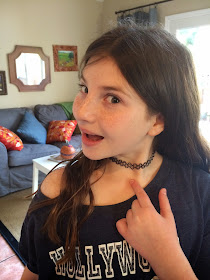 Max, however, gets downright testy when I notice his accomplishments, give him props or attempt to snap pictures. Right after I got the below photo—of him doing an admirable job holding a cup, controlling the flow of liquid and drinking by himself—he let out a roar. 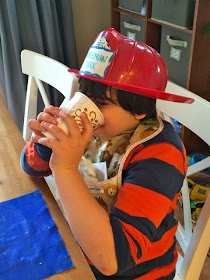 So I keep my gushing low-key with Max. I did want to let out a shriek earlier in the week when he came home from school with this: 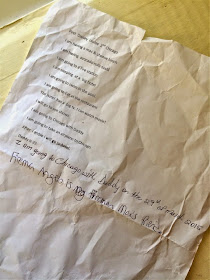 He had typed it up all by himself, at school. It's about his joy trip to Chicago with Dave in March and what they'll be doing (with a mention of the Disney Cruise we're going on in December, and capped off with a line I had to add about a firefighter friend he adores). It started out as a fantasy, after Max saw some cool Chicago fire stations on YouTube, but then Dave decided it would be fun to do a boys' trip there, so they're going. It's in honor of Dave's birthday, Max says. Right.

Even more happy-making than kvelling to yourself: Synchronized kvelling with your significant other. As Dave and I occasionally do when we watch Max ride a bike, participate in an activity or achieve an inchstone. When Max's music therapist posted some videos this week, Dave and I watched them standing in front of my computer late at night, with sappy-happy looks on our faces. We know just what Max has been through in his life, and we know what a feat the singing is. And he is trying so, so hard to articulate words, and he gets better as the song goes along. And, OMG, the cuteness.


Wishing you lots of pride, swoons and kvelling this week.


And just a little more because...pride.