Max wants to be first and we let him. Is that so wrong? 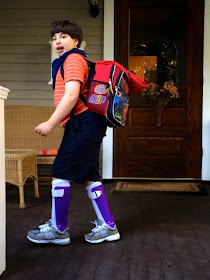 In the last couple of months, Max has developed a new mission in life: He would like to go first.

He does NOT want to be the first one to take his vitamins or to go to sleep at night, however. Go figure.

Sometimes, as he dashes ahead of us somewhere, he'll announce "I win!"

I'm loving this competitive side of him, which I've never seen before. I've been trying to find a new local sports activity or team where his gotta-be-first urges can be put to good physical use.

But I've also been struggling with this. Sabrina, for one reason.

Usually, here's how it goes:

Me to Sabrina: "Please let him go first" (while feeling guilty for asking, because she deserves to go first, too).

She's usually good-natured about this, with the occasional eye roll. "Max is sooooo sensitive!" she likes to say, as a way of describing Max's requests and sensory issues. If she ever got really upset about this I'd put an end to it but she doesn't seem to mind or care. Nor do I let him do this around other kids. For our family, though, letting him lead the way seems like a small price to pay for keeping the peace, because he gets seriously upset if he does not go first.

Still, Sabrina is only 9 years old and sometimes, she'll dash ahead of him anyway and Max will let out a roar. That's what happened at the diner the other day. When he started having a meltdown in the waiting area, with all of us hungry and tired, I declared "Do over!" and we trudged out again and down the ramp so Max could go up first.

Something else I struggle with: What am I teaching Max by always letting him go first? As a child with special needs, he gets a whole lot of attention in our family. I do not want him growing up thinking the world revolves around him, and I usually do my best to not let him have his way.

But then I think of how older children sometimes allow younger children, ones who are less adept than they are, to win races or games. This isn't that different. Max needs all the confidence he can get in this world. And if coming in fake first makes him feel good and victorious, well, there are far worse parenting decisions I could make.