That next big development win, and not hoping too hard 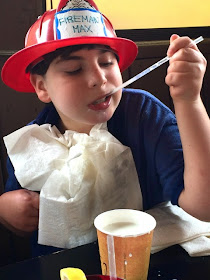 I don't have a wish list in my mind of Things I Hope Max Will Do. For one, thinking about them can be overwhelming (it would be a pretty long list) and for another, aching for him to achieve stuff does neither of us any good. As I've learned, Max will do things on his timeframe, and nobody else's. Or maybe he won't do them, and we'll deal as we always have.

That's not to say that I don't get excited—seriously, seriously excited—when it seems like Max is figuring out a new skill. That happened over the weekend when we were at a restaurant and he started playing around with a straw.

Most parents tell their kids not to play with their food, but I've always encouraged this with Max. When he was young, feeling different textures helped him get past sensory challenges and encouraged him to try new tastes. And now, I'm hoping play encourages him to drink with straws, which he hasn't yet mastered. It involves the act of pressing your lips together (not a movement that comes naturally to him) along with the coordination of sipping and swallowing (ditto). The speech therapists have worked on this over the years, with not much progress so far. It would be a great thing for him to achieve, because holding cups isn't the easiest thing for him and sipping from a straw could give him more independence

Sabrina started dropping water into her mouth from a straw, and Max wanted to do that with his Fireman Max milk (exactly how he ordered it from the waitress). 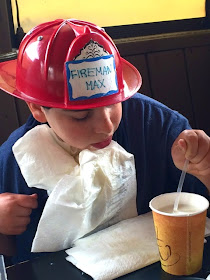 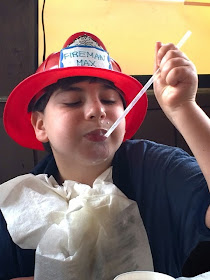 Who knows, maybe one of these days he'll blow milk bubbles. Wheeeee! Yet another one of those achievements you'll never read about in any child development book. 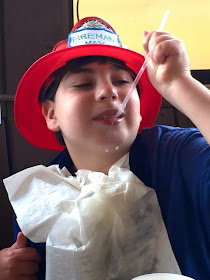