Some numbers have stayed with me:

• 2977 people in New York City, Washington, DC and Pennsylvania died on 9/11
• 658 victims from Cantor Fitzgerald out of 960 employees
• Two to 85: age range of the victims
• 20: percentage of Americans who knew someone who got hurt or killed

A number I recently looked up:

In the past few months, since Max has determined that he is going to be a fireman when he grows up, I have met dozens of firefighters. I didn't know any before, let alone gotten into discussion with the guys at our local firehouse (and there are only guys).

Last weekend, the chief allowed Max to go upstairs to the staff's living quarters. Max plopped himself down at the gigantic dining table and we chatted with several of them. We talked about what they liked to cook. We talked about their kids. I learned that the station serves as backup for stations in several other local towns, and vice versa. It was sobering to find out that these men regularly risk their lives not just for people in our town but for those in others, too.

I've been awed by how welcoming these firefighters are to Max every single time he shows up. "Hi, Fireman Max!" they greet him. They show him the truck parts, opening compartments and explaining the equipment. They lift him up into the back seat of trucks. They turn on the truck lights and the siren and laugh heartily when Max does his imitation of one. They slide down the poles and put their jackets and helmets on him. They talk with him about the photos of fires lining the walls. They are the good people of this world.

When we were on vacation in Atlantic Beach, North Carolina, in August, I saw a big chunk of metal resting in front of the firehouse we visited and I asked about it. It's a beam from one of the towers. Firefighters at the station had served on 9/11. One of the men's fathers, a New York City firefighter, had died rescuing others from the Twin Towers. The men applied to get a beam, waited for two years, drove to New York to retrieve it, then set it up as a memorial monument. It's signed by two Queens, New York fire departments that worked with the Atlantic Beach crew during their time in New York. I'd never been that close to a piece of the towers and I walked around it, hesitant to touch it. It seemed holy. 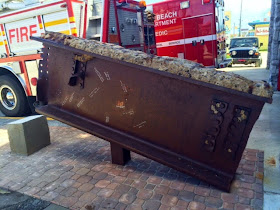 As Max plays out his firefighter fantasies, as the men we meet joke around with him, it's easy to forget that they do some of the most important and dangerous work there is. Few jobs are more selfless, as became tragically clear that September day thirteen years ago.

Later today, the kids and I will bring cookies over to the fire station, as we've done before. But at 8:46 a.m., when the first plane hit, I'll be at local park joining in the mass moment of silence. I'll flash back to that morning, when I watched hell unfold on a TV screen in an office conference room. I will picture the young woman, Melissa Renee Vincent, whose friendly face I saw on "MISSING" flyers everywhere. I will think of the New York Bravest who we lost on 9/11 and the ones who perished of 9/11-related illnesses in the aftermath. And I will say a little prayer for their families, and the firefighters we have come to know.

I will not forget those we lost. And I will never again take for granted the ones we have.