The best sounds I hear all week long 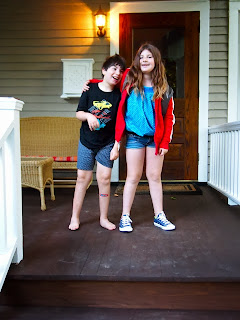 Saturday morning, Max gets speech therapy at the same time Sabrina has a violin lesson. Max is in his room, Sabrina's in the living room, and I hang out in a room upstairs where I can hear both of them.

"Mmmmmm," says the speech therapist. "Mmmmm, Max. Can you say that?


From downstairs, I hear strains of Sabrina playing Brahms' Waltz No. 5. She's learning by the Suzuki method, same as I did as a kid on piano. It emphasizes listening and repetition. The waltz is one of my favorites; it sounds like this:


"Me!" the speech therapist is saying.

They chat a bit more. The therapist plays games and colors with him; she's seen Max since he was about three years old, and she knows how to engage him and elicit sounds I never otherwise hear.

Even as Max continues to make physical and cognitive gains, the speech progress is slow. His brain isn't telling the muscles that control speech the right things to do. His tongue and jaw coordination, spasticity and swallowing mechanism also conspire against him. Of course, he has his trusty iPad and speech app. But Max tries so hard to articulate words, and we'd like to make his speech as intelligible as possible.

I usually know what Max is saying—and if I can't tell, Sabrina can. When we were at an ice-cream store Saturday night and a song came on, Max said something and his face lit up. I had no idea what it was until Sabrina translated: "Katy Perry!"

"Listen to the rhythm," the violin teacher tells Sabrina, and she claps. I hear Sabrina play and stop. Then they play together, Sabrina's more hesitating sound growing stronger next to the violin teacher's mellifluous one. She's been playing violin for about two years now, and her confidence and technique are coming along. When people come to visit she'll whisper "Should I play violin for them?" and when I say "Yes!" she'll dash off, grab the violin and do a little concert. I'm half-expecting her to start charging, one of these days.


"Car!" says Max, and I almost fall off my chair because I can't recall ever hearing him say a "c" so clearly. Today is an excellent session.

"Slower, slower," the violin teacher says. Sabrina's at the end of the piece, and she's rushing it. Her sense of pacing is still developing. Sabrina goes back and plays the final part again, and it sounds really nice.

"Very good, Max!" the speech therapist says. I didn't hear the sound he made but later she tells me it was the first time she ever got Max to say a "p." The letter's particularly hard for him because of the air control required, and she got him to say it after a series of oral-motor exercises. "I don't think you'd be able to get a 'p' out of him," she tells me. I don't mind; I'm just excited he said it at all, another beautiful sound at our house on a Saturday morning.