Get the insurance company to pay your kid's therapy and medical bills! Really! 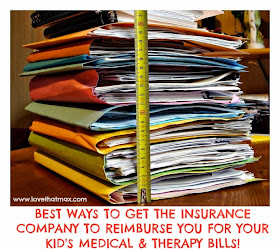 1. Send in duplicate copies of bills every single time. That way, the insurance company will most likely only lose/misplace one copy. If you happen to get a rep on the phone who points out that you are duplicating bills, just say, "It's like Vegas, baby! I'm upping my odds that my kid's therapy bills will get reimbursed!" Or something like that.

2. When the rep asks for your phone number, so she can call and update you on the progress of your claims, say in your most weary voice, "I'll give you our number but I'm sure you won't call me back." The rep will then rise to the challenge as if to prove you wrong. Or the rep still won't call you back, but at least you'll feel just a teeny bit satisfied that YOU KNEW IT.


3. Tell the rep that you have no choice but to believe that the company is purposefully delaying payments and/or losing bills you have sent in and that you will be forced to call your attorney/Geraldo Rivera/Honey Boo Boo.

4. After you spend 25 minutes on the phone with Ashley (actual name!) at United HealthCare (actual company!) going over details of therapy bills that you have submitted but are unaccounted for, wait several weeks until you never hear back from her. Call and get another rep on the phone named Chris and ask him to look into the situation. When he (miraculously) calls you back, you will find out that Ashley is actually in training and that somehow all the information you shared with her is unfortunately nowhere to be found, possibly because she wrote it down on a gum wrapper that she accidentally tossed (that's not actual, but it is possible). Have a huge hissy fit, and luck out that Chris is actually competent, intelligent and sympathetic and he is going to look into claims for the last six months and make sure all were reimbursed. Note down the case number. Thereafter, whenever you call United HealthCare, Blue Cross/Blue Shield, Aetna, Let's Stress Out Special Needs Parents Inc. or whatever your insurance company, reference the case number and leave a message for Chris to call you, so you can be assured of speaking with the company's lone competent rep. Also: Karma, Ashley. KARMA.

6. Forget sending in paper bills—so old school. Instead, try a singing telegram, and be sure to let the performer know the correct billing codes to sing. Just warn him to flee the premises if he ends up singing your bills to someone named Ashley.

7. This one's straight from the school of Laying It On Thick. Tell the rep, "Since is the fourth time I am calling to inquire about the lack of reimbursement for the speech therapy bills, I think at this point it might be helpful to hear from the member in question." Put your child on the phone, and when said child utters something unintelligible that only you can understand (like "I'm getting a Cars 2 Talking Lightning McQueen for my birthday!") get back on the phone and say, "I hope you can better understand why he needs the speech therapy and why I need to get reimbursed for those therapies, so I can keep getting him more."

8. There's always this note you could enclose, although if it were foolproof I wouldn't be writing this. And there's always the chance the note will end up in the hands of Ashley, who might accidentally use it to scribble down this week's grocery shopping list.

9. Start a change.org petition for Apple to create an app people can use to scan medical and therapy bills, zap them directly to the insurance company and send them messages approximately every ten minutes reminding them to reimburse you.

10. If you are sending in multiple bills, be sure to attach a form to each bill so the person reviewing the bills won't be traumatized by your attaching two bills to one form. You can also sprinkle colorful glitter into the envelope, thereby totally charming the staffer into doing a quick and competent job of sending your bills through the system.

11. Try reverse psychology. Ask the rep the following: "Do you reimburse for Chuck E. Cheese therapy? Because the rides and games are very beneficial to my child with special needs, not to mention that machine where he has to try and grab stuffed animals with a giant claw!!! How about Toys R Us therapy? Disney World therapy? Disneyland? Or maybe Dollywood? No? Do you reimburse for ice-cream therapy because I swear, chocolate ice-cream is the best motivation for getting my kid to walk/talk/move!!! Or, wait, how about cable TV therapy? I'm telling you, when my kid was watching Dog With A Blog the other day, he articulated a really clear 'dog!' OK, so you don't reimburse for any of those? Hmmm. Well, how about physical therapy?"