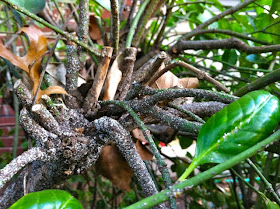 I stood on the side of my house, gaping at a pair of euonymus bushes. They had tiny white flecks all over the branches and on some leaves. Thousands and thousands of them. This can't be good, I thought. Also: UGH.

I posted a photo in the garden section of my town's bulletin board. Soon, someone diagnosed the problem: scale, a garden pest. I might be able to get rid of the things, but it would take repeated dousings of horticultural oil. "Homeowners can have difficulty controlling these insects, because scales are often overlooked since they remain immobile most of their lives...." I read on an agriculture site, a description that sounded just like one of my relatives. "Heavily infested plants are often covered with small, disc-like or waxy coverings, and underneath each covering is the scale organism feeding on the juices of the plant."

HOLY SUBURBIA: THERE WERE ORGANISMS FEEDING ON THE JUICES OF MY PLANTS.

In the scheme of things, itty-bitty pests that eat up your bushes are a minor problem, especially when you have one child with special needs, another with an attitude, a job and a life to keep up with. There are considerably bigger pests I contend with, like the insurance company and its consistent incompetence at processing Max's therapy bills; coating the clueless phone rep with horticultural oil isn't an option. Thing is, having a well-tended house is important to me. I grew up in a Brooklyn, NY, apartment with a pack-rat dad and assorted cockroaches, so a house where things are (relatively) in place and clean and the landscaping looks nice is helpful to my calm.

When Max was a baby and nothing about him seemed in my control, it felt soothing to be in the apple-green nursery I'd decorated, swaying him in the rocking chair with the toile pattern of children at play.  On stressful days, flipping through the Restoration Hardware catalog is my therapy. When I come home wiped from a long day at work, seeing our lush lawn and the newly-potted red mums gives me a bliss boost.

Along with the good nature stuff, though, we've gotten wild kingdom. Over the years, we've dealt with home-invading squirrels (including one I got Dave for our 10th wedding anniversary and one with a thing for Justin Bieber), dead birds and aliens on the lawn of the herbal variety. I'm now on a first-name basis with the local pest control guy. Another pal is the retired neighbor I pay to the cut lawn, which we never have the time to do. I try to keep up with trimming, ripping out old stuff, fertilizing and whatever I can get to.

The white-speckled bushes bummed me out. They were old but in good shape, until the plague descended upon them. It seemed like a Herculean task to spritz oil over all of the specks. As if I had time. Dave lacks the gene that enables you to spot stupid scale insects on your bushes, which goes hand-in-hand with the gene that informs your brain you must get rid of them. So it would be up to me.

But then, the leaves weren't in such bad shape, a sign that the infestation hadn't totally taken hold (just typing the word "infestation" makes my skin crawl). I didn't want to lose the bushes, or pay to get new ones, or do nothing and leave a gaping hole where they once had been or worse, risk feeling super-skeeved whenever I walked by.

Sigh. I would fix them.

I hit a gardening center on Sunday with Sabrina while Max was at a program. After talking with the lawn guy, I got me a big jug of horticultural oil and a spritz bottle. While the kids were inside taking a TV/iPad break, I pulled on gardening gloves and started spritzing with zeal and a few choice words. The oil is supposed to suffocate the little buggers, assuming nobody starts a change.org petition against you for doing them in. I finished the job by flashlight at night, after the kids were asleep.

I'll have to apply another few rounds of oil. I don't have the time. But, as always, you dive in and deal with that one more thing, and the next one that comes along, and the one after that. Because you just know to keep going and going, putting out fires, getting rid of pests and leaping over tall buildings in a single bound. Because if you don't do it, who will?