Special needs parenting and double standards: been there 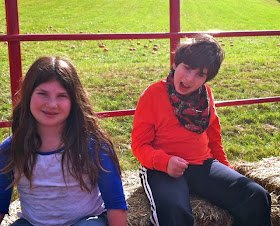 Max is fond of asking me to say "Max is getting a Cars 2 Talking Lightning McQueen for his birthday present!" multiple times throughout the day. I would suspect this is a government plot to drive me crazy, except that our government isn't open right now.

Familiar phrases make Max happy and content. Me, not so much. I am a mom of the human variety and lately there are times when I do not possess the will to say, one more time, "Max is getting a Cars 2 Talking Lightning McQueen for his birthday." And yet, I force myself. Sometimes I'll say the words superfast or in slow-mo, just for a change, and Max cracks up. I haven't yet found an app that'll repeat stuff ad nauseam, although perhaps I could make big bucks off it! Possible title: Repeat. Repeat. Repeat.

Saturday night, I reached my limit. We'd had a long day. Dave was away, traveling for business, and I was a mom of the exhausted variety. So when Max said "Cars 2!"—his usual prompt—and looked at me expectantly, I blurted, "Max, sweetie, I am a little tired of talking about Cars 2 Lighting McQueen, which you are getting for your birthday, could we not talk about it for awhile?" Max just stared at me—not angrily or sadly, but curiously—and actually didn't ask again the rest of the night.

There are times when it becomes startling clear that I have different expectations for the kids. Sabrina has gotten into the habit of asking for a Butter brand sweatshirt. Those things cost a hundred and up, and I have basically explained to her that she will get one over my dead body, which gave her pause, but just a little. She keeps asking and asking and I will say to her, "Sabrina, please stop asking! It makes me think that you are not listening, so let me just say again that I am not going to spend a hundred dollars on a sweatshirt."

I don't hesitate to ask her to quit talking about the sweatshirt. But Max, I've indulged, and it's got nothing to do with the fact that the toy he wants is reasonably priced. Repeating stuff, I've figured (and the neurologist has told us), is how his brain works. A few years ago, he loved to say over and over, "Max eats spaghetti with sauce!" and there was no stopping him until he grew out of it.

Part of children's natural development is learning that the world does not revolve around you (although I know adults who didn't get that memo). Growing out of the ego-centric phase can be harder for both kids with special needs and their parents. Max has often been the center of our attention because he's needed so much help, everything from holding a cup when he drinks to pressing buttons on toys. Although he still needs assistance with activities involving motor skills he's maturing in other ways, especially with social stuff and reading emotions. The other day, after he'd been screeching about something and he saw me get upset, he said "Sorry." And he meant it.

I am so used to working around Max's quirks and challenges that it had never occurred to me to ask Max to ease up on the Lightning McQueen talk, or that he would oblige.

Max did bring up Cars 2 Talking Lightning McQueen the next day, but far less than he has in the past. He clearly understood I was less than enthusiastic about constantly discussing it. That said, he spent part of the morning at a program where he charmed someone else to talk about it and even write it out for him. In Play-doh, no less. 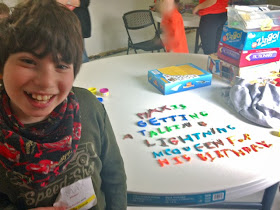