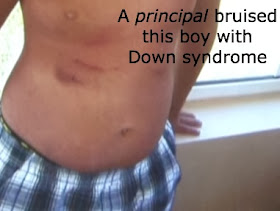 Months after Robert Ethan Saylor died at the hands of police over a movie theater incident, another story involving shocking violence against a person with special needs is making headlines. This time, it involves an 11-year-old with Down syndrome.

According to news reports, the child has a habit of throwing himself on the floor and refusing to get up. That's what happened September 12 at the New Leaf School in Neptune Beach, Florida. How the principal handled it: "The principal pulled him across the floor, just under 30 feet, some of it unfortunately over concrete and over two door thresholds," reported Lt. Adam Militello of the Neptune Beach Police Department.

Cesar Suarez recalled his reaction when he picked up his grandson from school: "You could imagine, when I saw his hand like that and his rib cage I said, 'Jesus Christ this is criminal. What did you do to my baby?'" The boy (adopted by his grandparents when his parents couldn't care for him) had bruises on his arms and rib cage.

The principal has reportedly apologized several times, sending cards and emails. There's an ongoing investigation; the State Attorney's office will decide whether or not to file charges. The child has been moved to another school.

New Leaf is geared toward kids with learning disabilities. You'd think educators like the principal would have know how to handle all kinds of discipline issues, including those involving kids with special needs. But, no. You'd think the police officers who encountered an agitated Robert Ethan Saylor on that fateful day would have had training in handling individuals with special needs. But, no.

These stories are horrifying and, in Saylor's case, tragic. They're eye-opening, too. We've come a long way from the days when kids and adults with disabilities were shuttled off to institutions, but there is clearly still so much misunderstanding and ignorance about people with special needs.

This week, I also read a story about an Australian mother with cerebral palsy assaulted by a group of kids. Rachel O'Neill has hearing and speech issues and walks unsteadily. When she went in to her local police station to file a complaint, she was told to return when she was sober. Really. "I came back every day for nine days and eventually had to get a letter from my GP to tell them they had to take my statement," she said. O'Neill filed a complaint with the Equal Opportunity Commission and won a settlement. But the even bigger win is that O'Neill is in the process of taking a course (one she helped to develop) that will qualify her to train police in handling people with disabilities.

It sure seems like police stations and schools in this country could use similar training programs—and that higher-ups should be making them mandatory.