Help for moms whose fantasy life needs a makeover 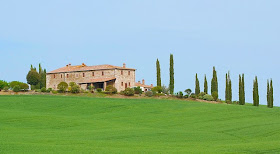 Last night, I started reading Under The Tuscan Sun by Frances Mayes. I've had it lying around for years, and finally picked it up. It's a memoir of the travel writer's renovation of a villa she purchased in the Tuscan countryside.

I've held off reading the book because I knew it would give me a severe case of wanderlust. Sure enough, after a couple of chapters I put it down and stared into space, dreaming about renting out a villa in Tuscany next summer.

My travel fantasies boil down to three types: Actually possible, fantastical yet possible and purely fantastical. Taking the kids to La Jolla, one of my favorite cities: actually possible. Taking the kids to The Great Barrier Reef: purely fantastical. A Tuscan villa falls squarely in the middle. We could find a gorgeous one at a reasonable price (hey, this is a fantasy), take off two weeks, explore nearby towns and vineyards, cook with local ingredients, eat lots and lots of fresh pasta, take afternoon naps in hammocks, find a Prada outlet store (I know, that would particularly thrill the kids).

And then, bringing my fantasy to a grinding halt: What if Max had a seizure? What if we needed to rush him to a hospital? How many good hospitals are there in the region? Would they even know what to do?

I'd studied in Florence when I was a junior in college, and learned Italian while I was there, but I wouldn't be able to count on my rusty Italian to get by in an emergency. This is when I picked up the phone and called the neuro's office, because I suddenly realized I didn't have an updated letter on how a hospital should treat Max if he ever had a seizure; I always carry a letter like that around, just in case.

The last time Max had a major seizure, a grand mal, he was just one and a half and the ambulance workers couldn't stop it. It took the doctors in the ER what seemed like forever to get him under control. It lasted about 40 minutes, and Dave and I were terrified Max had gotten more brain damage. But, no. He was OK. Max had just learned how to high-five and I still remember him lying groggily in the hospital bed, his little pudgy hand lifting to give us a high-five, maybe the best high-five ever in the history of high-fives.

I remain traumatized, most of all, by the sight of Max lying on the couch in our living room, seizing uncontrollably. I thought he was dying. He's never had a seizure like that since,  but I will never be able to get that out of my head. It's definitely post traumatic stress disorder I haven't dealt with.

Back to my non-fantasy: I figured I could always get an emergency-instructions letter translated into Italian before we went on a trip, and of course I could look up info on Tuscany hospitals and then surely, through social media, someone would know someone who had family in Italy and I could get more medical scoop that way.

Yep, this is how my daydreams go these days. I've come a long way from the carefree travels of my pre-parent life when I hiked in Patagonia, Chile; road-tripped around Ireland, Costa Rica and Spain; and sailed Alaska's Glacier Bay. Once, I flew as a courier to Milan to a friend who was studying there. Air courier companies basically pay your plane ticket (or they used to, it's been awhile) so they can use your luggage allocation to transport packages. My dad was convinced I was acting as a drug mule, and that he'd never see me again. Everything went fine except at the end, when a guy at the airport handed me my plane ticket to go home. After he left, I realized he'd given me a ticket receipt instead of the actual ticket. I stood there freaking out until I happened to spot him going down an escalator, and he got me the real ticket.

Settling into a villa in Tuscany seems like a relatively tame thing to do. I just need to get past my concerns about foreign travel with Max and the PTSD although the lure of pasta, vino and afternoon naps might do it.